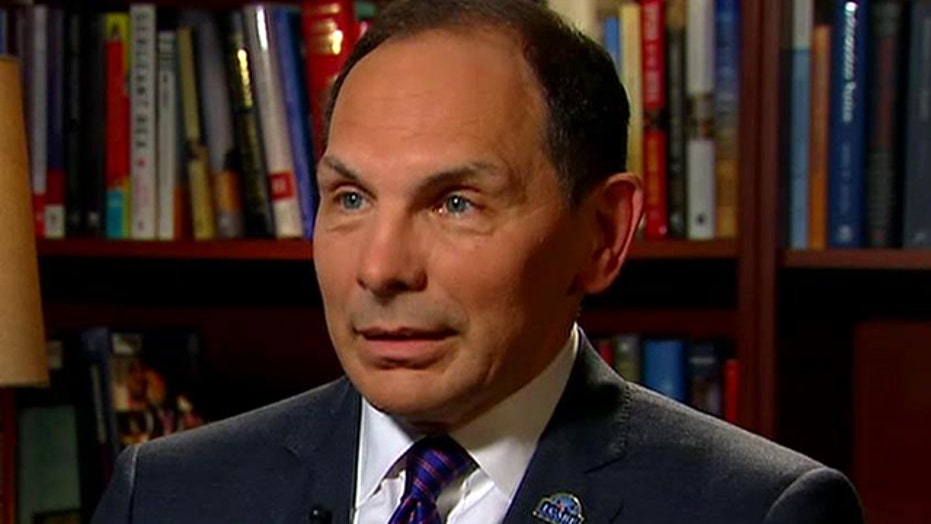 Veterans Affairs Secretary Bob McDonald on Monday announced a complete restructuring in the wake of the scandal over excessive wait times and poor care that critics blamed for patient deaths.

The changes come a day after the secretary revealed on CBS' "60 Minutes" his intention to fire or otherwise discipline more than 1,000 workers -- and hire thousands more doctors and health care workers.

Asked during the interview how many employees should be fired, McDonald said the disciplinary report given to the Veterans Affairs committees in the House and the Senate "has about 35 names on it" and he's got "another report that has over 1,000" names. All VA firings are subject to review by an administrative judge, complicating any push to remove employees.

The separate overhaul announced Monday, on the eve of Veterans Day, is designed to make it easier for veterans to access the sprawling department and its many websites. McDonald called the restructuring the largest in the department's history and said it will bring a singular focus on customer service to an agency that serves 22 million veterans.

"As VA moves forward, we will judge the success of all our efforts against a single metric: the outcomes we provide for veterans," McDonald said. The VA's mission is to care for veterans, "so we must become more focused on veterans' needs," he said.

As part of the restructuring the department will hire a chief customer service officer and create a single regional framework that will encompass all aspects of the agency, from health care to benefits, loan centers and even cemetery plots, McDonald said. The VA now has nine organizational maps and at least a dozen websites, many with their own user names and passwords.

Eventually, McDonald would like all veterans to have one user name and password for all VA services. McDonald hopes to complete the reorganization, nicknamed "MyVA," within a year.

Meanwhile, the new secretary discussed his plans for cleaning house at the VA during the interview with CBS' "60 Minutes."

“I was incensed. I was incensed,” McDonald said of the scandal and cover-up at his agency. “Our veterans have earned these benefits. They earn them with their lives in danger.”

In the interview, McDonald said the VA is taking "aggressive, expeditious disciplinary action, consistent with the law" against more than 1,000 of its 315,000 employees.

McDonald's comments represent a departure from his previous public remarks. At a news conference last Thursday, he said the VA has proposed disciplinary action — up to and including firing — against more than 40 employees nationwide since June.

Asked in the “60 Minutes” interview how many doctors and nurses and other medical professionals he needs to hire, McDonald said “we probably need about 28,000.”

In a live streaming seminar at the Washington Post on Monday on veterans hiring, McDonald said the VA is making progress in other areas.

He added: "Veterans give VA health care higher ratings than patients at most private hospitals."

The hardest part of McDonald’s mission thus far is hiring the thousands of new doctors, nurses and medical staff. He's in the midst of a recruiting campaign at medical schools and universities where he points out to prospective employees that, for all its faults, the VA is at the forefront of medical care in the treatment of traumatic brain injury and PTSD and in the use of prosthetic limbs.

As for the looming disciplinary measures, some Republican lawmakers have criticized the VA for moving too slowly to fire managers involved in covering up wait times and other problems.

But McDonald said the agency is moving as fast as it legally can.

"We've got to make it stick," McDonald told CBS. "We propose the action, the judge rules and the individual has a time to appeal."

Only one of four senior employees recently targeted for removal by the VA has been fired, a fact Republican lawmakers cite in criticizing McDonald's implementation of the new law, which gives McDonald wide authority to fire poor-performing employees and streamlines the appeals process.

Two of the targeted employees retired. A third was granted an extension allowing her more time to reply to the VA's decision.

The VA has been under intense scrutiny since a whistleblower reported that dozens of veterans may have died while awaiting treatment at the Phoenix VA hospital, and that appointment records were falsified. Since then problems have been revealed at VA health care sites across the country.

The scandal led to the ouster of former VA Secretary Eric Shinseki and to a new law making it easier for veterans to get VA-paid care from local doctors. The agency has been overwhelmed by the influx of veterans from wars in Iraq and Afghanistan, the aging of Vietnam War veterans and expanded eligibility for benefits as a result of exposure to Agent Orange and other problems.

Fox News’ Doug McKelway and The Associated Press contributed to this report.