Blackburn: Bredesen should be denouncing viciousness in race

With less than a week to go until Election Day, Republicans are seeing their odds improve of holding a critical Senate seat in Tennessee after a brief scare, though warning signs are emerging out West -- with controversial Democrat Kyrsten Sinema pulling slightly ahead in Arizona.

In Tennessee, an NBC News/Marist poll found Rep. Marsha Blackburn ahead of Democratic rival and former governor Phil Bredesen by 5 points, rebounding from an earlier survey putting Bredesen ahead by a hair.

Bredesen bucked his party by announcing in October he would support now-Supreme Court Justice Brett Kavanaugh. "Obviously, I need to have independents and Republican votes to be elected in this state, but I'm certainly not ignoring Democrats," Bredesen told The Tennessean. "This is a campaign of inches, not feet and yards, and I need to get the votes wherever they are."

While a Vanderbilt University poll earlier this month showed Bredesen up by 1 point, the latest poll has Blackburn ahead 51-46 percent. It's another sign that pop star Taylor Swift's endorsement of the Democrat may have had limited impact. However, Republicans may be concerned their lead isn't bigger considering the voter makeup -- the NBC poll’s sample shows that 43 percent of likely voters identify as Republicans, but just 27 percent identify as Democrats. President Trump is due to visit the state on Sunday.

"We knew from the get-go it was going to be tight, this is his fourth state-wide race and this is my first," Blackburn said on Fox News' "America's Newsroom" Tuesday.

Meanwhile in Arizona, despite a host of controversies hitting Sinema, an NBC News/Marist poll shows her leading Republican Martha McSally by 6 points in a head-to-head contest. That race, however, tightens when Green Party candidate Angela Green is included in polling. At that point, Sinema’s lead shrinks to 3 points -- within the margin of error. 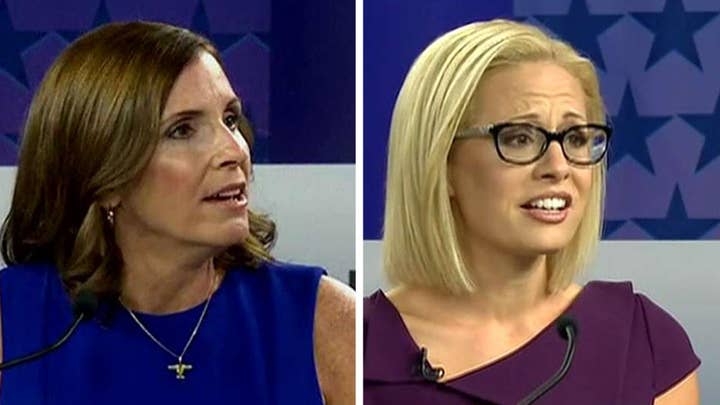 Sinema, who is running as a moderate Democrat in the red state, has been plagued by a series of controversies over comments she made in her days as a left-wing activist -- including saying that she didn’t care if an American joined the Taliban. McSally has seized on those remarks, accusing her of supporting treason, and has contrasted it with her own service as a fighter pilot after 9/11.

Also in the West, Nevada Republican Sen. Dean Heller continues to hold a slim lead over Democratic challenger Jacky Rosen. An Emerson poll this month showed Heller ahead by 7 points, while the Real Clear Politics average of polls shows him ahead by 1.7 percent. Heller was given a boost by a recent visit to the state by Trump, who backed Heller and labeled Rosen “wacky Jacky.”

In Texas, a CBS11/Dixie Strategies poll also put Sen. Ted Cruz ahead of well-funded Democratic challenger Beto O’Rourke by 10 points -- a day after a Quinnipiac poll showed Cruz ahead by 5,

On the House side, the Real Clear Politics map shows 204 House seats tilting Democratic, and 199 tilting Republican, with 32 in the “toss-up” column. Fox News’ Power Rankings similarly puts the split at 207 seats for Democrats and 199 for Republicans, and the rest up in the air. It takes 218 seats to claim a majority.