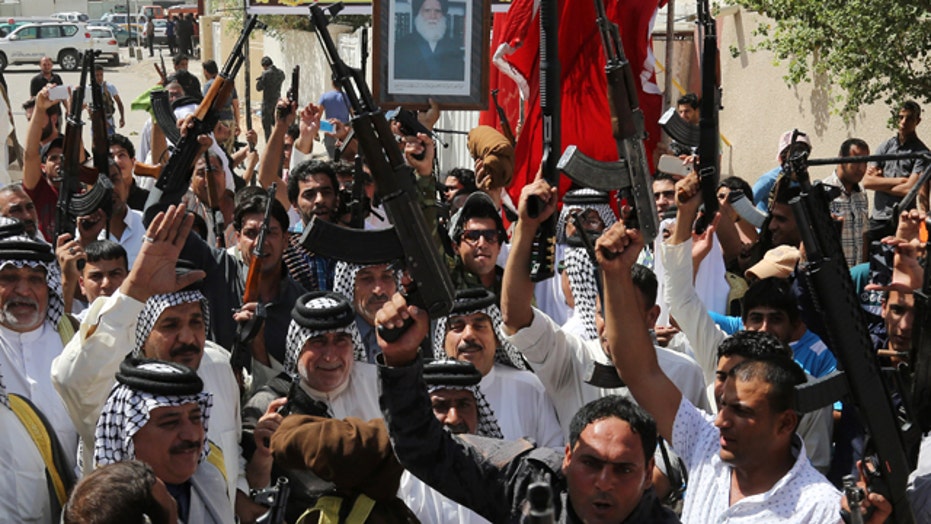 Should the US have predicted the rise of ISIS?

The Iranian government, which the White House is now looking to as a possible partner to help counter the insurgency threatening to split Iraq, was cited just months ago by the Obama administration's own State Department as a prime instigator in that country.

Counterterrorism officials warned about Iran's meddling in Iraq as part of its report on state sponsors of terrorism.

The warning underscores the challenging -- and outright confusing -- situation the Obama administration finds itself in as it considers whether to align with Iran in order to save Iraq from Sunni militants.

According to sources familiar with the incident, the Syrian planes struck with the help of Iranian intelligence. There is no bomb damage assessment from the attack, but it is the first time there have been reports of Syrian warplanes having crossed into Iraq since ISIS fighters swept across Iraq beginning a week ago.

The strike raises the prospect of the United States, Iran and Syria all battling the same enemy in Iraq.

All three have an apparent interest in preventing the fragile Iraqi government from falling to radical Sunni militants who have toppled several northern Iraqi cities and towns and threaten to advance farther south.

"We're open to discussions if there is something constructive that can be contributed by Iran, if Iran is prepared to do something that is going to respect the integrity and sovereignty of Iraq and ability of the government to reform," Secretary of State John Kerry told Yahoo! News.

A senior State Department official told Fox News on Monday that the United States and Iran briefly discussed Iraq on the sidelines of nuclear talks in Vienna. The engagements did not include military coordination or strategic determinations about Iraq's future, but about how ISIS threatens other countries in the region, including Iran, and the need to refrain from supporting a sectarian agenda in the nation, the official said.

The Obama administration has openly advocated for the ouster of Syria's Bashar Assad. And the recent State Department report on Iran raises serious questions about whether the U.S. and Iran would really be working toward the same goals in Iraq.

The Washington Free Beacon first reported on the April warning, as it relates to the current deliberations.

As reported by the Free Beacon, the report warned that Iran was working against U.S. goals in Iraq, by boosting Shiite militia groups -- sectarian tensions are part of what allowed the Sunni Islamic State of Iraq and Syria to gain ground in the country's north. The State Department report specifically said Iranian forces were working with Hezbollah to provide advisers in Iraq for Shiite militants "in the construction and use of sophisticated improvised explosive device technology and other advanced weaponry."

Further, the report said Iran has "remained unwilling to bring to justice senior al Qaeda (AQ) members it continued to detain, and refused to publicly identify those senior members in its custody."

The White House, State Department and Pentagon all insisted Monday that they are not considering any military cooperation with Tehran.

The possibility of partnering with Iran to deal with a common foe has divided some of the Obama administration's toughest critics.

Sen. John McCain, R-Ariz., called the idea of an alliance of convenience with Iran the "height of folly."

Citing the Syrian war, McCain strongly urged the Obama administration not to partner with Iran this time.

"This is the same Iranian regime that has trained and armed the most dangerous Shia militant groups, that has consistently urged Prime Minister Maliki to pursue a narrow sectarian agenda at the expense of national reconciliation, that supplies the rockets that have been fired at the U.S. Embassy in Baghdad, that has sponsored acts of terrorism throughout the Middle East and the world, and that continues to use Iraq's territory and airspace to send weapons and fighters to prop up Bashar al-Assad in Syria," McCain said in a statement, reminding the president that U.S. and Iranian interests "do not align" and their involvement could make the situation in Iraq worse by inflaming sectarian tensions and driving more Sunni's into the ranks of ISIS.

Yet Sen. Lindsey Graham, R-S.C., who typically is in lockstep with McCain on national security matters, on Sunday likened it to the U.S. aligning with Stalin during World War II, because he "was not as bad as Hitler."

"The Iranians can provide some assets to make sure Baghdad doesn't fall," Graham said on CNN's "State of the Union."

Meanwhile, the U.S. is positioning Naval vessels in the Persian Gulf to assist in the event of an evacuation. Americans already are being moved out of the U.S. Embassy in Baghdad -- according to a senior U.S. official, about 1,000 U.S. Embassy personnel are slated to be moved to other U.S. consulates in Iraq, as well as to Jordan. That represents one-fifth of the 5,000 personnel at the compound, the largest American embassy in the world. The embassy remains open.

The White House Monday afternoon said approximately 275 military personnel are being sent to Iraq "to provide support and security for U.S. personnel and the U.S. Embassy in Baghdad," according to a statement.

Obama says the forces are going to provide support and security for U.S. personnel and the U.S. Embassy in Baghdad. He says the forces, which are entering Iraq with the consent of the nation's government, are equipped for combat and will remain until the security situation becomes such that they are no longer needed.