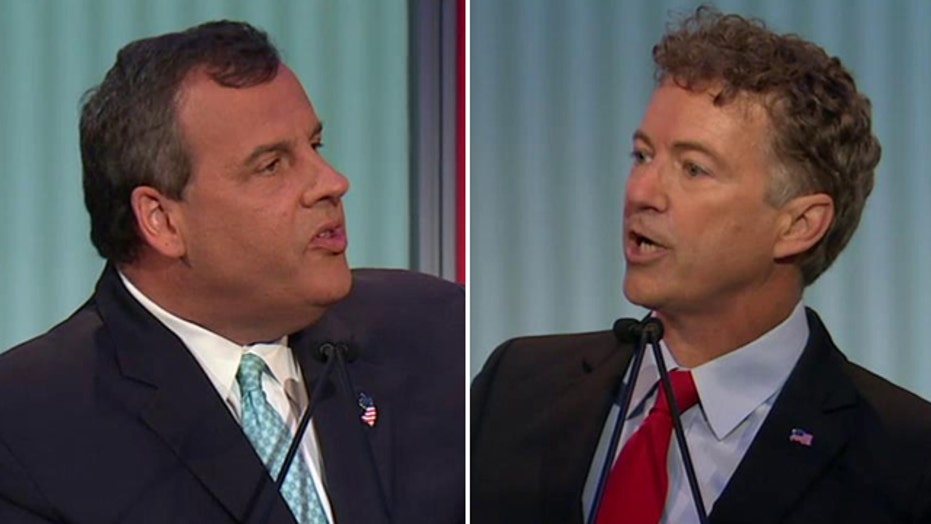 Sparks flew between New Jersey Gov. Chris Christie and Kentucky Sen. Rand Paul Thursday when they clashed over the NSA collection of phone records, and previous comments by Christie criticizing Paul over the issue.

Christie had previously said that Paul should be called before Congress if the U.S. were ever hit by a terrorist attack after Paul opposed the bulk collection of phone records by the NSA.

When asked about the comments by Fox News host Megyn Kelly at the Fox News-Facebook  debate, Christie stood by his comments, citing his experiences on 9/11 and work as U.S. attorney after the terror attack.

“When you actually have to be responsible for doing this….we did it for seven years in my office, respecting civil liberties and protecting the homeland and I will make no apologies ever for protecting the lives and the safety of the American people,” Christie said.

“We have to give more tools to our folks to be able to do that, not fewer and then trust those people and oversee them to do it the right way,” Christie said.

“I want to collect more records from terrorists, but less records from innocent Americans,” Paul replied. “The Fourth Amendment was what we fought the revolution over.”

Christie called Paul’s answer “ridiculous” and asked Paul “how are you supposed to know” who the innocents and the terrorists are.

“Senator, you know, when you’re sitting in a subcommittee just blowing hot air about this, you can say things like that,” Christie fired back. “When you’re responsible for protecting the lives of the American people, then what you need to do is to make sure you use the system the way it’s supposed to work.

Paul said Christie fundamentally misunderstood the Bill of Rights and that he was seeking to end “searches without warrants, indiscriminately of all Americans’ records.”

“I don’t trust President Obama with our records. I know you gave him a big hug, and if you want to give him a big hug again go right ahead,” Paul said, referring to Christie’s hug with President Obama when the president arrived in New Jersey days before the 2012 presidential election – a hug which angered many Republicans, who said it helped Obama win re-election just days later.

Christie shot back: “You know Senator Paul, the hugs that I remember are the hugs I gave to the families who lost their people on September 11th. Those are the hugs I remember. And those had nothing to do with politics.”