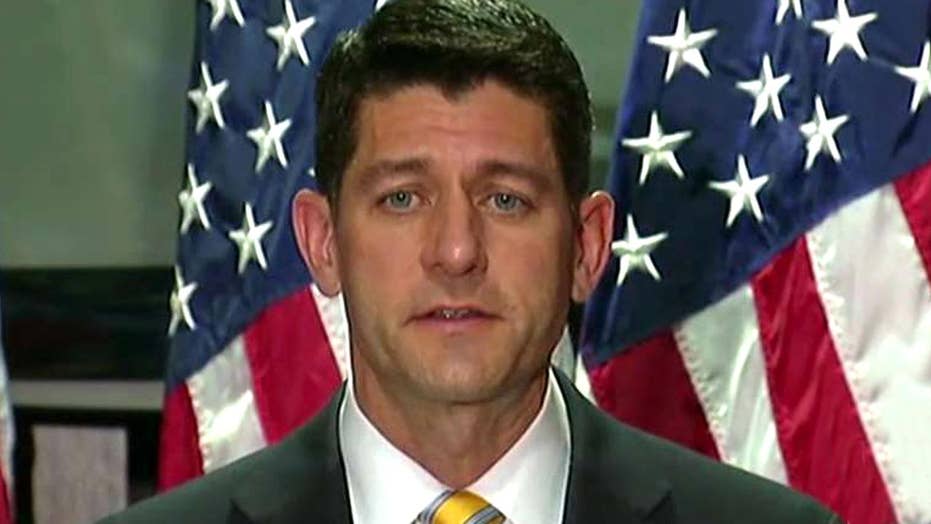 Ryan on Comey memo: Our job is to gather all the facts

House speaker tells press: We can't deal with speculation, innuendo as politics is being played

House Speaker Paul Ryan on Wednesday urged against jumping to conclusions in the wake of a report that President Trump earlier this year asked then-FBI Director James Comey to end the probe of former national security adviser Mike Flynn.

“We need the facts,” Ryan said.

Speaking to reporters, Ryan backed House Oversight Committee Chairman Jason Chaffetz’s request overnight to see the apparent February memo where Comey made these claims, along with other documents.

The House speaker said Congress should also hear from Comey himself. He asked why, if Comey indeed made such a request as alleged, he did not take action at the time.

“There are a lot of unanswered questions,” Ryan said.

Several Republicans have expressed an interest in hearing from Comey and seeing the memo in the wake of Tuesday’s New York Times report.

Democrats, meanwhile, have seized on the report to escalate their calls for a special prosecutor to pursue the investigation of Russian meddling in the 2016 presidential campaign and alleged ties to the Trump campaign. Some have suggested it points to possible “obstruction” of justice, though the White House denies the reported Comey allegations.

“The only way out is a special prosecutor,” Senate Minority Leader Chuck Schumer, D-N.Y., said on the Senate floor Wednesday morning.

The memo surfaced a week after Trump fired Comey, a move Democrats claimed was linked to the FBI's Russia probe.

The Times said Comey wrote the memo following a meeting with Trump on Feb. 14, after Flynn resigned from the administration. The paper acknowledged it had not seen a copy of the memo, but said a Comey associate read parts of it to a reporter over the phone.

The memo was presented as the clearest evidence yet that Trump tried to influence the Justice Department and FBI probe of Russia meddling.

But the White House rejected the characterization that the president tried to shut down an investigation.