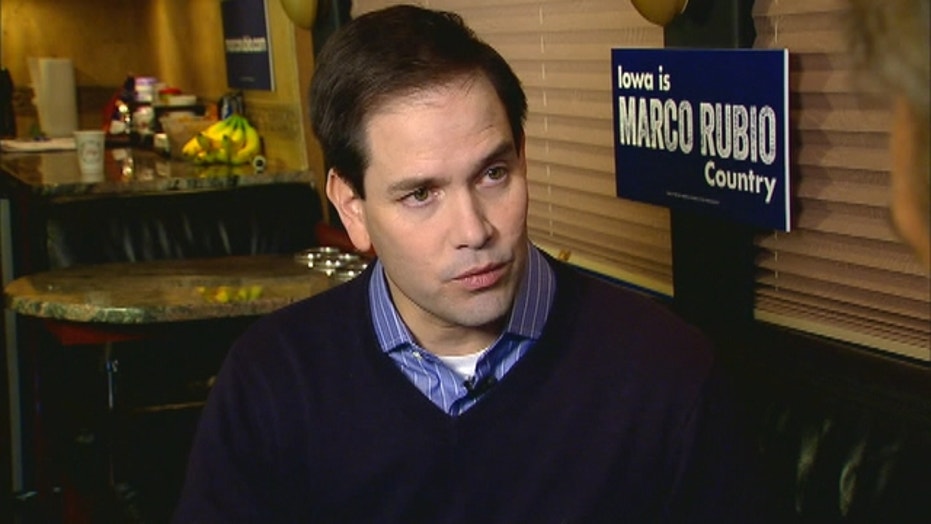 Before the last Republican debate heading into the Iowa Caucus, Senator Marco Rubio is taking the high road.

He's calling the feud between front-runner Donald Trump and Senator Ted Cruz an 'interesting sideshow' while downplaying the advantages of a Trumpless debate on Thursday.

"I know this whole fight between them and Donald not coming and Ted Cruz challenging him to a one on one, mano-a-mano debate, it makes for great theatrics and an interesting sideshow but  this election is about turning America around and that’s what I’m focused on," Rubio told Fox News Senior National Correspondent John Roberts.

Trump and Cruz have been trading barbs and insults as they find themselves locked in battle for first place in the polls heading into the Iowa caucus. On Tuesday Trump dropped out of the Fox News Channel debate, which is to air on Fox News Channel at 9 p.m. Cruz criticized the move, calling it 'astonishing' and disrespectful to Iowans.

The Texas senator than challenged Trump to a one-on-one debate without a moderator, after Trump said he dropped the FNC debate because of Fox News Host Megyn Kelly, whom he considers a biased reporter. Many journalists have come to her defense, saying that she has asked the tough questions that were necessary in a previous debate that she moderated.

The Trumpless debate leaves an opportunity for Rubio, currently third in the polls in Iowa, to shine. Though, he downplayed the effects Trump's no-show will have on Thursday night's discussion.

"I have no idea other than there will be more time for everyone else I suppose but look, I understand everybody is focused and fixated on it," Rubio said. "It’s one less person to ask questions at so most certainly there’s more time for the rest of us so we’ll have 8 people like we did the last time."

The Florida senator also downplayed whether Trump's no show will draw more spotlight on Rubio's own feud with Cruz.

"The battle between me and Ted Cruz is Ted just not being honest," Rubio said.

"Ted is just willing to say, do or be anything in order to get votes so when he’s out there portraying himself as the only real conservative in the race, I mean, his record doesn’t live up to that in terms of the standards he set for himself so those are policy differences and we’ll always discuss those.  Those are legitimate.  Not personal."