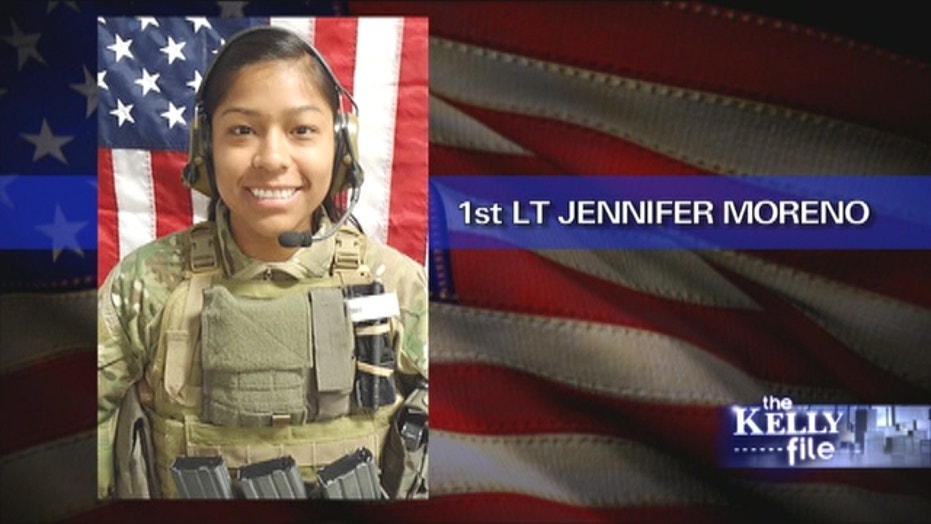 Families of fallen troops don't get benefits due to the current government shutdown,

Army 1st Lt. Jennifer Moreno, 25, is remembered by her loved ones as a great leader and a kind person, who always aspired to be a nurse.

On Sunday, she was one of four Army soldiers killed when her unit was attacked by enemy forces using an improvised explosive device in Zhari, Afghanistan.

“It invalidates the fact that she went into harm way to protect our way for life...and now we’re telling the family we are going to put this all on hold.”

Now families mourning the loss of their loved ones, such as Moreno's relatives, must also grapple with being left behind by the nation she fought for -- thanks to the government shutdown.

The bodies of fallen soldiers will begin arriving in the United States on Wednesday but the Pentagon said their families will not receive the $100,000 payments or "death gratuities" that the government typically pays out to families within three days of a soldier's deaths as long as the shutdown continues, due to the ongoing shutdown.

The funds are meant to help families deal with their immediate financial needs following the deaths of their loved ones.

On Wednesday afternoon, the House voted unanimously for legislation that would restore those benefits but it was unclear if the Democratic-led Senate will take up the bill.

“We have some heart-rending situations,” Pentagon Comptroller Robert Hale told reporters in a briefing on the legal review of the “Pay Our Military Act” over the weekend. President Barack Obama signed the law hours before the shutdown started on Oct. 1, according to Reuters. We’ve had a number of people die recently and we will be able to pay them, but not until the lapse of appropriation ends.”

In the meantime, a private foundation has stepped forward to cover death benefits for the families of troops who've been killed in combat after the Pentagon confirmed the payments have been suspended as a result of the partial government shutdown.

“Typically they give them 100k for emergency before other benefits kick in,” said Michael Sloan, who counsels war veterans, adding, “it comes before the insurance policy and such.”

Sloan said that, for the soldiers' families, it's like adding salt on a fresh wound.

He’s describing death benefits normally sent to military families days after they’re loved one is killed in action.  “For a family suffering a loss the last thing they want to hear is this is on hold.”

In what may be the biggest casualty of the government shutdown, death benefits have been suspended.

“It invalidates the fact that she went into harm way to protect our way for life.” said Sloan, adding, “and now we’re telling the family we are going to put this all on hold.”

Moreno graduated from San Diego High School and the University of San Francisco, where she earned a bachelor’s degree in nursing. She deployed to Afghanistan in June as part of a cultural support team assigned to the Army Special Operations Command.

“We are extremely sad,” said one of her high school teachers, Ms. Reese, “she was quality person. A quality young women.”

Looking through their San Diego High School year book, two of her former teachers remembered Moreno as as a great leader, a member of the ROTC and someone who was kind.

“She always wanted to be a nurse,” said teacher,  Jennifer Harden, adding, “it was her goal from the time she left for college.”

California Gov. Jerry Brown said Moreno “bravely gave her life in service to our state and nation,” and ordered that flags be flown at half- staff at the Capitol in Sacramento in her honor Tuesday.

Moreno is survived by her mother, Marie V. Cordero, and her sisters Jearaldy Moreno and Yaritza Cordova of San Diego, and her brother, Ivan F. Moreno, currently serving in the U.S. Army.