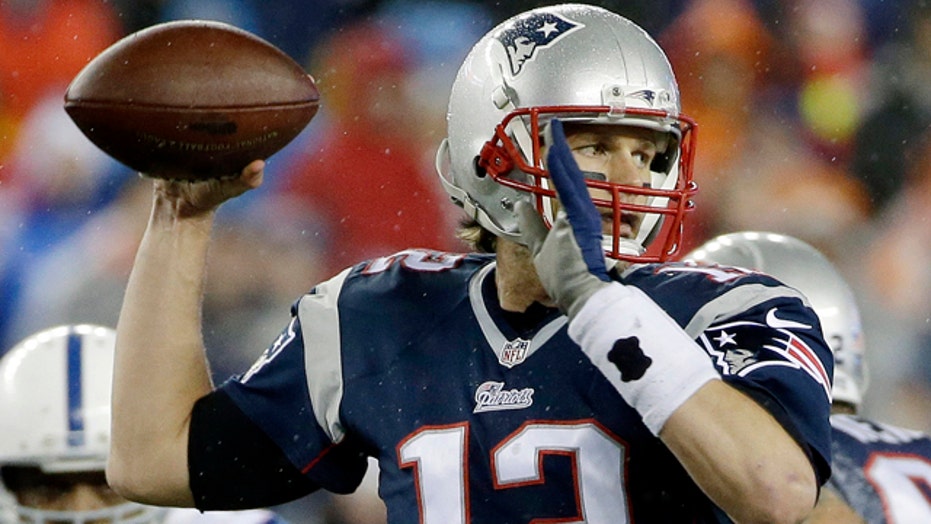 A defiant Tom Brady went on offense hours after the NFL sacked him with a four-game suspension for his role in “deflategate,” vowing through his agent Monday night to appeal the “ridiculous” penalty.

A months-long investigation commissioned by the league found the Super Bowl MVP played a role in the intentional deflation of game balls, a move that experts say could have given Brady an advantage in the New England Patriots’ AFC championship victory over the Indianapolis Colts.

"Games on the field don't count as much as the games played on Park Avenue,"

On Monday, NFL Commissioner Roger Goodell came down hard on Brady and the Patriots, benching Brady for the first four games of the upcoming season, fining the team $1 million and docking it a first-round draft pick next year and a fourth-round pick in 2017.

"There is no evidence that Tom directed footballs be set at pressures within the investigation and answered every question presented to him," said Don Yee, Brady's agent, who blasted the probe and suspension as "ridiculous" with "no legitimate basis."

Patriots owner Robert Kraft, who has a close relationship with Goodell, said the team will accept the discipline but complained that the punishment "far exceeded any reasonable expectation."

It is the second time in the last decade that substantiated allegations of cheating by the Patriots have put pressure on the league to punish the team. In the scandal known as "Spygate," the Patriots were caught illegally videotaping the Jets' defensive signals during the first game of the 2007 season. The team was fined $750,000 and docked a first-round draft pick.

Yee also charged that the  NFL "participated with the Colts in some type of pre-AFC Championship Game planning regarding the footballs." The league had reportedly been tipped off that the Patriots deflated game balls, and checked them at halftime, finding that 11 of 12 balls were deflated well below regulations. In the NFL, teams use separate footballs on offense.

The investigation conducted by New York-based attorney Ted Wells, which was released last week, stopped short of finding  as fact that the balls were deliberately deflated on Brady's orders. The NFL’s threshold for imposing discipline requires merely a finding of strong probability of wrongdoing. The report found that it was "more probable than not" that Brady was "at least generally aware of the inappropriate activities" in the balls being deflated. Yee, however, called the outcome of the report pre-determined and blamed the NFL for its lack of standards or protocols in handling footballs prior to games.

Although Brady was uncooperative with investigators, refusing to turn over his cellphone, two team employees did. Text messages between John Jastremski, a team equipment assistant, and locker room attendant Jim McNally, who appears to call himself the "deflator," left little room for doubt that footballs were purposely doctored for Brady's benefit.

Both attendants were suspended indefinitely without pay, NFL.com reported.

"This is not the fault of Tom or the Patriots," Yee said. He said the decision diminishes the sport and that "games on the field don't count as much as the games played on Park Avenue," a reference to the league’s headquarters in New York.

The suspension, though seen by some as a strong message from the league, falls in line with estimates from league insiders.

Brady, one of the league's most recognizable players and a likely future Hall of Famer, won his fourth Super Bowl ring in February.

At a pre-scheduled speaking engagement in Salem, Mass., after the 243-page report was release, Brady declined to discuss what he thought of the NFL findings.

"I don't really have any reaction," he said. "It has only been 30 hours, I've not had much time to digest it. When I do I will be sure to let you know how I feel about it. And everybody else."
Eli Manning, the quarterback for the New York Giants, told reporters on Monday that he was not surprised by the NFL’s swift action.

“Obviously the football, I think it is about integrity and you have to follow the rules. If someone’s breaking the rules I understand you’re gonna get punished for it.”