Tiger Woods on President Trump: 'You Have to Respect the Office'

President Trump threw his unabashed support behind Tiger Woods on Sunday, a week after the golfer opened up about respecting the office -- regardless of any agreements or disagreements with the president.

“Tiger Woods showed great class in the way he answered the question about the Office of the Presidency and me,” Trump tweeted. “Now they say the so-called ‘left’ is angry at him. So sad, but the ‘center & right’ loves Tiger, Kanye, George Foreman, Jim Brown & so many other greats, even more.......”

Woods was responding to a question last week about Trump’s policies, his feuds with NBA and NFL players and whether the golfer had anything to say to people who “find it interesting” that he maintains a rather personal relationship with the president.

“He's the president of the United States. You have to respect the office. No matter who is in the office, you may like, dislike personality or the politics, but we all must respect the office,” Woods said during a news conference just after the final round of the PGA Northern Trust tournament.

One reporter asked Woods, “At times, especially 2018, I think a lot of people, especially immigrants, are threatened by him and his policy — what do you say to people who might find it interesting that you have a friendly relationship with him?”

“Well, I’ve known Donald for a number of years,” Woods responded. “We've played golf together. We've had dinner together. I've known him pre-presidency and obviously during his presidency.”

Woods’ comments drew strong criticism from many in sports world. 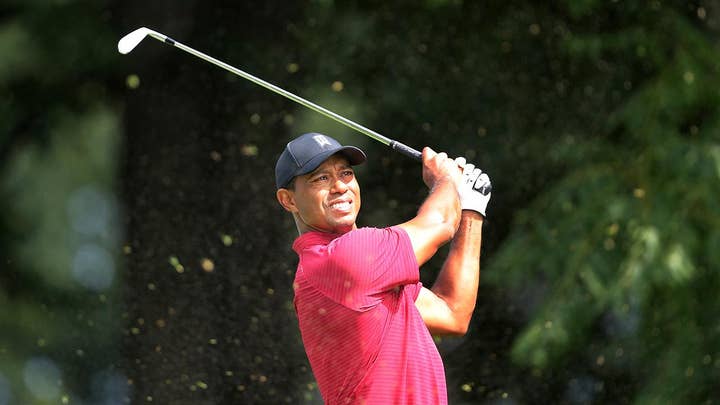 The other names cited in Trump's tweet all have praised the president in recent months. Kanye West, in a tweetstorm heard 'round the world, wrote last April: “You don't have to agree with trump but the mob can't make me not love him. We are both dragon energy. He is my brother. I love everyone. I don't agree with everything anyone does. That's what makes us individuals. And we have the right to independent thought.”

Foreman, a boxing legend, called Trump “a good president” last year. He said that around the time of his boxing heyday, “We were patriotic. The greatest day of my life was when I put on the colors, representing the United States.”

Brown, an NFL star enshrined in the Pro Football Hall of Fame, said last month: “I should be criticizing Trump on every level because he does certain things that call for criticism, but when I look at television I see all these announcers become experts and they’re pointing the fingers and they’re not doing a doggone thing but pointing their fingers, I find myself really pulling for the president.”

Trump followed up his Woods tweet by writing: “The fact is that African/American unemployment is now the lowest in the history of our country. Same with Asian, Hispanic and almost every other group. The Democrats have been all talk and no action. My Administration has already produced like no other, and everyone sees it!”

Lukas Mikelionis and Brian Flood contributed to this report.