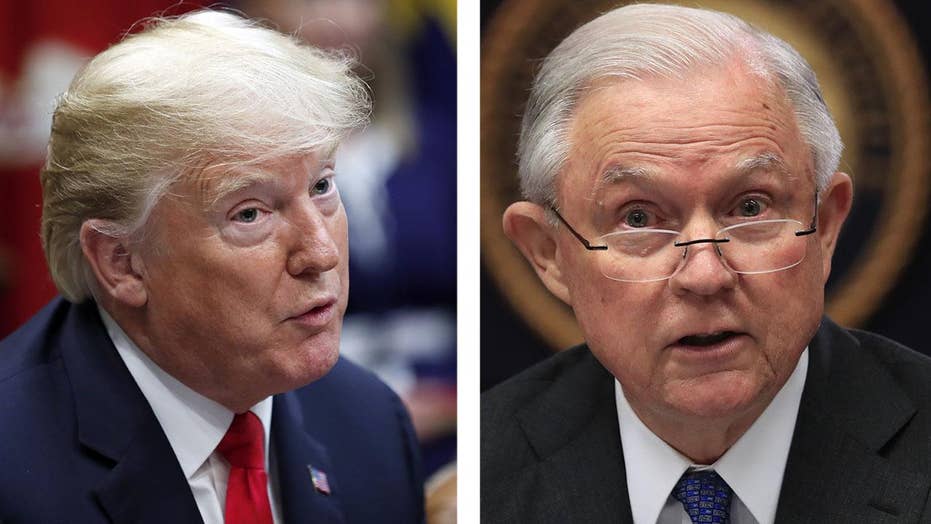 President Trump tells Bloomberg he will not fire Attorney General Jeff Sessions before the midterms, threatens to pull the U.S. out of the World Trade Organization if it does not 'shape up.'

President Trump has said that Attorney General Jeff Sessions is safe in his job until after the November midterm elections, Bloomberg News reported Thursday.

The website, which conducted an Oval Office interview with the president Thursday, reported that Trump declined to comment when asked if he'd keep Sessions on beyond November.

"I just would love to have him do a great job," the president said.

Trump has repeatedly lashed out at Sessions on social media over the attorney general's decision last year to recuse himself from the FBI's Russia investigation. Last week, the president tweeted that Sessions "doesn't understand what is happening underneath his command position" and told "Fox & Friends" that his attorney general had "never taken control of his department."

The president also said that the only reason he named Sessions attorney general was the former Alabama senator's early support in the 2016 presidential election.

Earlier this week, Sen. Lindsey Graham, R-S.C., told NBC News that the relationship between the two men was "dysfunctional" and "beyond repair."

"The president's lost confidence in Jeff Sessions," Graham said. " ... Is there somebody who's highly qualified that has the confidence of the president who'll also understand their job is to protect [Special Counsel Robert] Mueller? Yes, I think we can find that person after the election, if that's what the president wants."