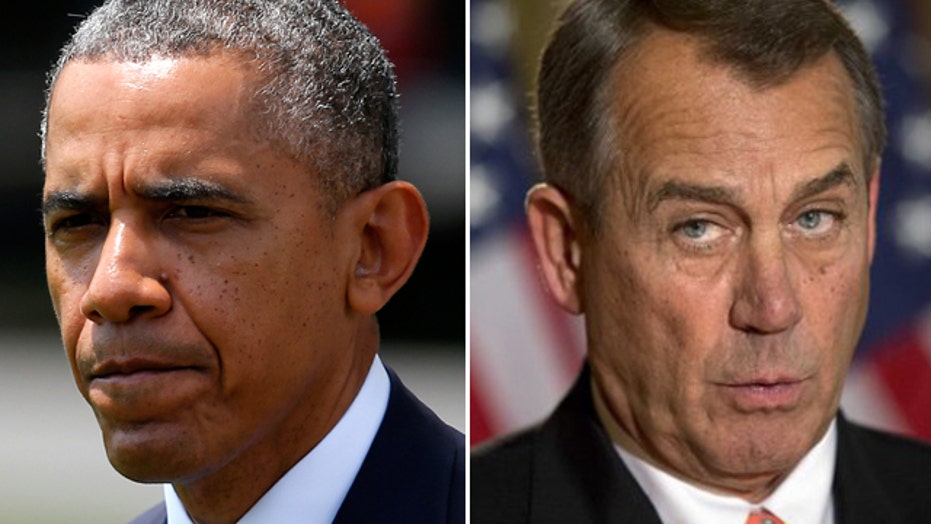 The chairman of the House Judiciary Committee charged Sunday that President Obama is "trampling upon" the constitutional authority granted to Congress, as he defended Speaker John Boehner's decision to file a lawsuit against the president for allegedly exceeding his authority.

"This is all about the United States Constitution," Rep. Bob Goodlatte, R-Va., told "Fox News Sunday."

Goodlatte rejected Democratic criticism that the lawsuit announced by Boehner amounts to an election-year political stunt. He cited a presidential pattern of "not enforcing laws, or changing laws that have been passed, taking power from the Legislative Branch."

This, he said, runs afoul of Article 1 of the Constitution which grants legislative powers to Congress.

"We ... have the power to bring causes of action when we believe that the president of the United States is exceeding his authority and is trampling upon Article 1 of the Constitution," Goodlatte said.  "To me, it makes a whole lot of sense to do this."

Boehner triggered a firestorm on Capitol Hill earlier this week after announcing he planned to proceed with such a lawsuit, challenging the president's use of executive actions. Republicans complain that Obama has taken a host of questionable actions on his own, including unilaterally changing provisions of ObamaCare, hiking the minimum wage for federal contractors, and loosening immigration and deportation policies.

On "Fox News Sunday," however, House Democratic Caucus Chairman Xavier Becerra, D-Calif., staunchly defended the president and argued that he has not crossed any constitutional or legal lines.

"The president simply said I'm going to do what I can within the confines of the law to make this work," Becerra said. "Absolutely, he's implementing the law ... he's not rewriting it."

Former White House counsel Kathy Ruemmler, on NBC's "Meet the Press," also claimed the suit was "just for show" and questioned whether the House would be able to show "injury" in order to even have the standing to sue.

"To say it's frivolous, I think, is an understatement," she said.

Obama, in light of the lawsuit threat, has vowed to continue to act on his own if congressional Republicans will not work with him. The president joked about the lawsuit during an address on Friday in Minneapolis.

"They're not doing anything, and then they're mad that I'm doing something. I'm not sure which of the things I've done they find most offensive, but they've decided they're going to sue me for doing my job," Obama said. "I mean, I might have said in the heat of the moment during one of these debates, 'I want to raise the minimum wage, so sue me when I do.' But I didn't think they were going to take it literally."

The president, though, has started to draw criticism from some liberal legal scholars and strategists outside of Congress -- including constitutional law professor Jonathan Turley -- who worry he has indeed exceeded his authority.

The Supreme Court on Thursday also rebuked the president, ruling unanimously that recess appointments he made to the National Labor Relations Board were invalid.