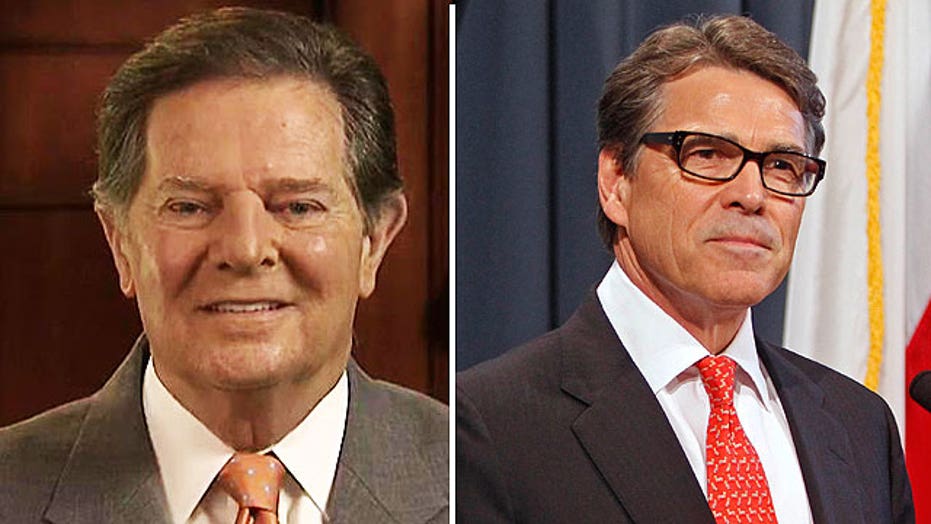 Former House Majority Leader Tom DeLay on Monday sharply criticized the Texas county prosecutor's office that indicted him and more recently fellow Texas Republican Gov. Rick Perry, calling the case against the governor a “vendetta” and another example of the “criminalization of politics.”

In an interview with FoxNews.com, DeLay attacked nearly every aspect of the prosecution’s case against Perry -- suggesting it was political retribution for the governor's attempt to remove a county district attorney with a criminal record and a “conspiracy” likely traceable to Washington Democrats.

“There is no doubt [the case] is politically motivated,” he said. “Once again, the district attorney of Travis County presented a case, not unlike mine, that was very weak, if it was a case at all. … It’s a conspiracy to use the legal system to politicize politics.”

DeLay was indicted in 2005 by a Travis County grand jury for allegedly conspiring to break election laws several years earlier in a case that involved charges of money laundering.

He was convicted in January 2011 and sentenced to three years in prison. But he was allowed free on bail while appealing his conviction. The Texas Court of Appeals ruled in Sept. 2013 that the evidence in the case was “legally insufficient” to sustain the convictions and DeLay was formally acquitted.

Perry was indicted Friday by a grand jury in Travis County, a Democratic-leaning district that includes the city of Austin, for allegedly abusing his official powers.

The governor had vowed to withhold $7.5 million from an ethics watchdog agency that was run by county District Attorney Rosemary Lehmberg until she resigned as a result of her April 2013 drunken-driving charge.

Lehmberg was caught with a bottle of vodka in her car, and her blood-alcohol level was three times over the legal limit.

Perry defunded the agency after Lehmberg, a Democrat, refused to resign.

Perry has been indicted on two felony counts in connection with alleged abuse of power.

On Monday, Perry's legal team was unveiled at an upscale Austin hotel. The lead attorney, Tony Buzbee, won a $1 billion judgement against BP after the 2010 Deepwater Horizon oil spill in the Gulf of Mexico. Joining him will be veteran GOP lawyer Ben Ginsberg, who led the team representing then-Texas Gov. George W. Bush during the 2000 Florida recount; Austin criminal attorney David Botsford; and former Texas Supreme Court Chief Justice Tom Phillips. It was not immediately clear whether or how many of the lawyers would be paid with taxpayer dollars.

Perry, a 2012 GOP presidential candidate with potential 2016 White House ambitions, is calling the case a “farce” and standing by his decision to attempt to remove Lehmberg, saying he and fellow Texans had lost confidence in her.

A mix of liberals and conservatives has come to Perry's defense and questioned the merits of the case, including David Axelrod, a top Democratic strategist and former President Obama political adviser, and Harvard Law professor Alan Dershowitz, a self-proclaimed liberal Democrat, who compared it to a Soviet Union show trial.

"The idea of indicting him because he threatened to veto spending unless a district attorney who was caught drinking and driving resigned, that's not anything for a criminal indictment,” Dershowitz told Newmax’s “American Forum.” “That's a political issue."

However, the Perry investigation was led by San Antonio-based special prosecutor Michael McCrum because Lehmberg was at the center of the controversy.

DeLay told Fox News on Monday that he wanted Perry to do more to dismantle the agency and that for years he has openly questioned its constitutionality, arguing in part that the district attorney in charge is locally elected but has statewide jurisdiction.

DeLay said Monday he cannot prove that Washington Democrats are trying to knock Perry out of the 2016 race but added the situation reminded him of when House Democrats Nancy Pelosi, of California, and Patrick Kennedy of Rhode Island, were trying to drum him out of Congress in the mid-1990s.

“You better take this seriously,” he said. “All of the judges are Democrats. And we polled 300 jurors, and the best I got was a Green Peace activist.”

Perry was indicted by an Austin grand jury on felony counts of abuse of official capacity and coercion of a public servant. The maximum punishment on the first charge is five to 99 years in prison, and two to 10 years on the second.

The indictment comes toward the end of Perry’s final term in office.

Lehmberg served about half of her 45-day jail sentence. A video of Lehmberg’s erratic behavior while being charged and jailed led to an investigation by a separate grand jury, which decided she should not be removed for official misconduct.