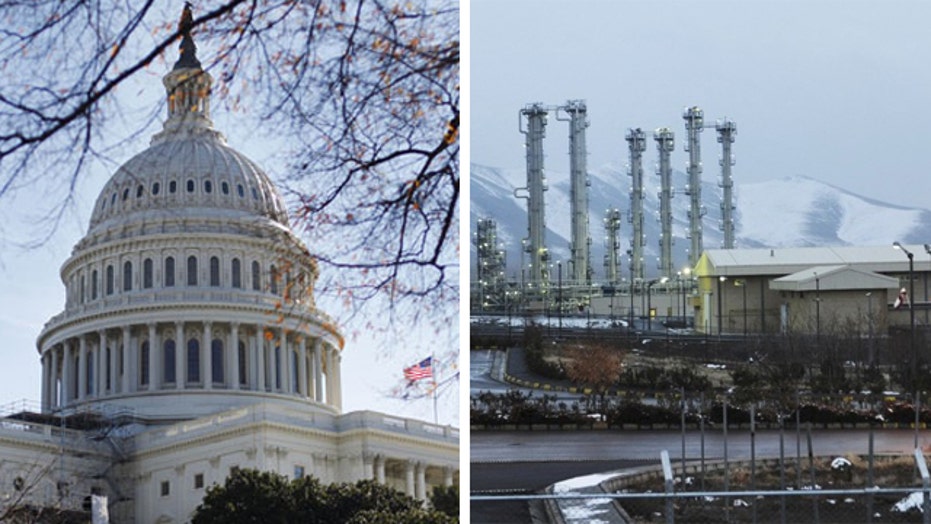 A Senate panel approved a bipartisan Iran sanctions bill on Thursday -- though the measure is likely to gather dust for at least two months after Democratic backers agreed to give the Obama administration more time to reach a nuclear deal.

The Senate banking committee advanced the bill on an 18-4 vote, with six Democrats voting for it.

The legislation would impose additional sanctions on Iran if international negotiators fail to reach a deal on the country's nuclear program by June 30. Sponsors of the Nuclear Weapon Free Iran Act of 2015 have argued the measure is necessary to keep pressure on Tehran as well as ensure that Congress has a say on any final agreement.

"The president and other officials have said that Congress should not interfere, that a deal is close, that the situation is delicate, and that an attempt to legislate any additional sanctions may give Iran an excuse to walk away from the negotiating table," committee Chairman Richard Shelby said at a Tuesday hearing. "It has been my experience that if a party is negotiating in good faith and with the intent to reach an agreement, they will seek common ground, not an excuse to walk away."

Senators on both sides of the aisle share the Alabama Republican's sentiment -- seven Democrats are cosponsoring the legislation. But a decision by Democratic supporters to yield to White House pressure leaves the bill short of the votes needed to pass the full chamber for now. Democrats have said they'll withhold support until after March 24, the deadline by which negotiators hope to have a political framework agreement in place. After that, Democrats plan to reassess whether the sanctions bill is needed.

"We remain deeply skeptical that Iran is committed to making the concessions required to demonstrate to the world that its nuclear program is exclusively peaceful by March 24," 10 Senate Democrats said in a letter to President Obama this week. "[But] in acknowledgement of your concern regarding congressional action on legislation at this moment, we will not vote for this legislation on the Senate floor before March 24."

Sens. Bob Menendez, D-N.J., and Chuck Schumer, D-N.Y., both of whom signed onto the letter, voted for the sanctions bill in committee Thursday so the measure would be on the floor and ready for consideration if talks fail.

The administration, which has aggressively lobbied against even conditional sanctions, says the threat alone of further action is enough to keep Iran at the table.

"Should Iran refuse a reasonable deal or cheat on its current commitments under the [agreement], the Senate and House could impose additional measures in a matter of hours. The administration would strongly support such action," Tony Blinken, deputy secretary of state, told senators Tuesday. "Iran is well aware that an even sharper sword of Damocles hangs over its head. It needs no further motivation."

The move by Democrats like Menendez to hit the pause button is more than a symbolic victory for the administration; contentious legislation requires 60 votes to pass the full Senate, meaning that Republicans would need to keep their own caucus of 54 together and pick up six Democrats to advance the measure. An additional seven Democrats would be needed to override a threatened presidential veto.

But unanimous GOP support is not necessarily a given as several Republicans have said they worry additional sanctions could scuttle negotiations.

"I'm a big fan of trying to exert and trying the diplomatic option as long as we can. If it fails, I will vote to resume sanctions and I would vote to have new sanctions," Sen. Rand Paul, R-Ky., said last weekend at a summit of prospective 2016 presidential contenders organized by Freedom Partners. "But if you do it in the middle of negotiations, you're ruining it."

The Kentucky Republican is working on alternative bill with Sen. Barbara Boxer, a California Democrat, that would allow Congress to easily re-impose sanctions if Iran violates the terms of an interim agreement.

Separately, Senate Foreign Relations Committee Chairman Bob Corker, R-Tenn., is pursuing an approach that would require any final agreement to be ratified by Congress.