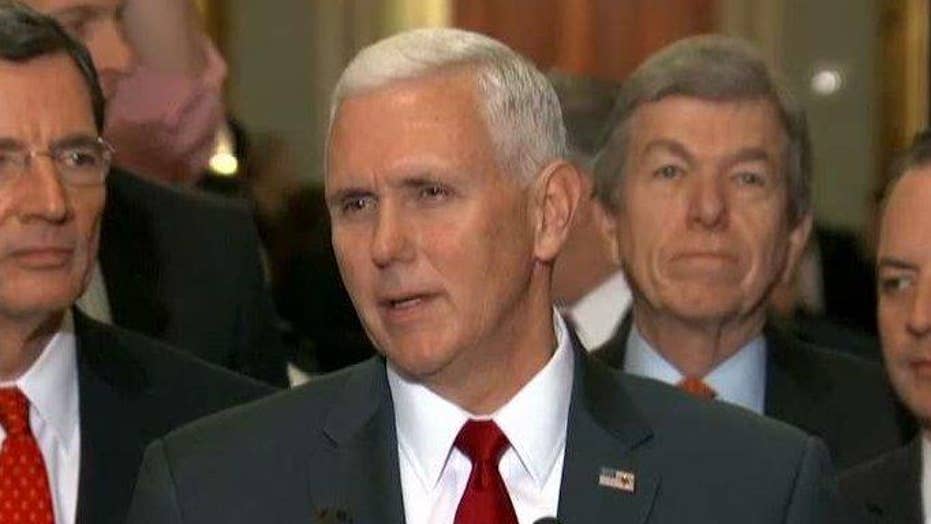 They have to repeal it before you can find out what’s in the replacement.

You’ve heard this all before.

In their zeal to discredit percolating health care legislation in 2010, Republicans seized on a truncated variation of a line uttered by then-House Speaker Nancy Pelosi, D-Calif., in a speech to the National Association of Counties.

“We have to pass the bill so that you can find out what is in it – away from the fog of the controversy,” Pelosi said.

What Pelosi said is not quite what Republicans or the public heard. But this is politics.

Republicans howled that no one knew what was in the bill. They argued the sheer size and scope of the legislation made it impossible for anyone to comprehend. And they dubbed the measure “ObamaCare.” So, obviously if you are a Republican and don’t like President Obama, then….

Obama made perhaps his last visit to the Capitol as President Wednesday to push congressional Democrats to resist GOP efforts to fillet his signature policy achievement.

Vice President-elect Mike Pence arrived at the Capitol synchronously with the president to huddle with House Republicans about plans to dismantle ObamaCare.

Both sessions doubled as pep rallies, engineered to invigorate the troops as they slipped into the latest battle between the House of Lancaster and the House of York. Though it’s no War of the Roses. Republicans and Democrats have only skirmished over ObamaCare since 2009.

Congressional Republicans aim to deposit the repeal bill on President-elect Trump’s desk by the first big congressional break in mid-February.

“We have six months to replace it,” argued Rep. Chris Collins, R-N.Y., after the Pence huddle.

Although, that’s not settled.

It could be a year. It could be a few years until Republicans require a replacement bill to come into effect – even as the GOP sung the “repeal and replace” mantra for years.

And in the interim?

“We do it in a transition that doesn’t pull out the rug from anybody,” said House Speaker Paul Ryan, R-Wis.

“Where they have been is on a rhetorical binge, demagoguing a piece of legislation they don’t have an alternative for,” said the Maryland Democrat.

“They didn’t give us any details,” said Rep. Mark Amodei, R-Nev., as he departed the Pence conclave.

The Republican Study Committee (RSC), the largest bloc of Republicans in the House, unveiled a svelte replacement measure Wednesday. Rep. Phil Roe, R-Tenn., bragged that the RSC plan is only about 180 pages and didn’t take long at all to leaf through compared to Obamacare.

“We have a plan,” bragged Roe.

That’s one. Others will come. Multiple replacement plans gurgled up over the years. But Republicans never advanced a replacement bill on the floor of either body because they couldn’t coalesce around a bill which would pass.

Trump’s campaign manager Kellyanne Conway accompanied Pence to the Capitol for the meetings Wednesday. She remained mum when reporters asked how Republicans will approve a replacement bill. However, Conway countered it was “unprecedented” for Democrats “to pass a major entitlement program” without Republican votes.

And now, as Republicans go to gut ObamaCare, will there be votes from the Democratic side? So far, no Democrats side with the GOP.

“They are voting for repeal,” said Senate Minority Leader Chuck Schumer, D-N.Y. “It is their obligation.”

Sen. Joe Manchin, D-W.Va., called up Pence on the fly Wednesday to request a sit-down. Manchin didn’t attend President Obama’s session, protesting the “Democrats’ only” nature of the meeting. By the same token, Manchin said it was “wrong” for Pence to only talk with Republicans Wednesday.

“There is not one Democratic vote to repeal,” said Manchin. “I’m not voting to repeal without a replacement.”

“We had people who got subsidies and got insurance for the first time,” beamed Manchin.

But Manchin said Republicans were playing with fire if a replacement package strips people of health coverage.

Democrats bank on this.

Schumer argues that if the GOP forges ahead with repeal and replace, it’s a “huge problem” for Republicans “because now they own it.”

Democrats are not-so-secretly hoping this entire gambit melts down like a Mariah Carey performance on New Year’s Eve.

“The Republicans have bitten off a very large piece of policy that I don’t know that they can chew, swallow and get a result,” said Hoyer.

Part of the challenge lies in the potential cost of repeal. Estimates vary wildly on how much an ObamaCare repeal would add to the deficit. It hinges on who you talk to and what metric they use. Various figures range from $350 billion to $1 trillion to $9 trillion over a longer period.

But one thing is clear: Republicans already prepped a provision to ignore internal congressional budgetary rules if the repeal is successful and explodes the federal deficit.

Efforts to defang the House’s quasi-official ethics watchdog office scored most of the attention early this week as the GOP advanced a “rules” package to govern the body during this Congress. But Republicans tucked a provision into the plan which bars the Congressional Budget Office (CBO) from counting a dramatic spike in deficit spending spurred by an ObamaCare repeal. Language in the resolution bars the CBO from tallying the cost of any ObamaCare repeal bill that bloats deficit spending by more than $5 billion over the next decade and $20 billion over the next four decades.

Trump contends he wants to bring deficits under control. Republicans embark on their ObamaCare repeal and replace mission just as they face a rendezvous with the federal debt limit come mid-March. Repealing ObamaCare and tackling debt are hard to add up. But maybe Republicans can pull it off.

And that’s why everyone must wait until they repeal ObamaCare to find out what may be in the replacement.