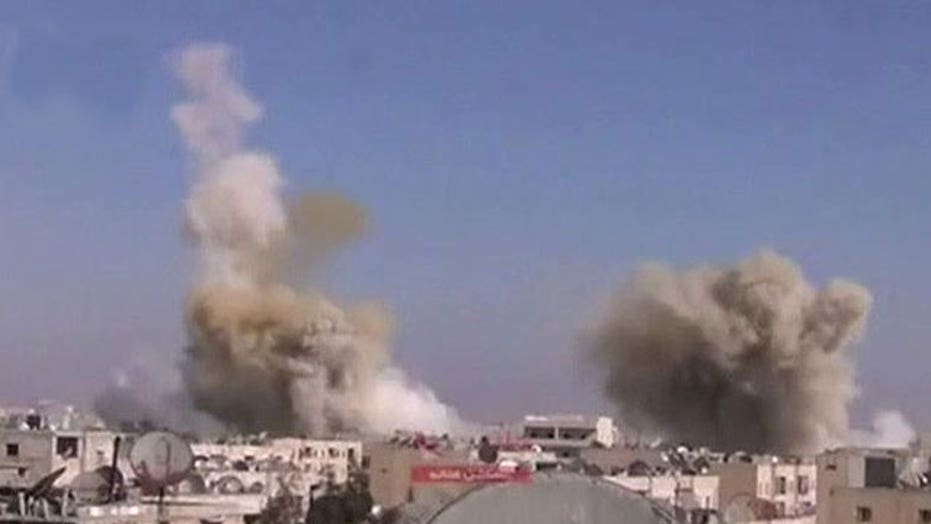 U.S. Secretary of State John Kerry called on Russia to help bring Syrian President Bashar al-Assad to the negotiating table Monday and claimed that the Syrian leader was not making a good faith effort to find a peaceful end to the country's ongoing civil war.

Speaking in Jakarta, where he is meeting with Southeast Asian leaders, Kerry said that the Damascus regime "refused to open up one moment of discussion" and added that Assad was "trying to win this on the battlefield instead of coming to the negotiating table."

"Right now, Bashar al-Assad has not engaged in the discussions along the promised and required standard that both Russia spoke up for and the regime spoke up for," Kerry said during a press conference in Jakarta with Indonesian Foreign Minister Marty Natalegawa.

Kerry also had harsh words for Assad's allies in Moscow.

"Russia needs to be a part of the solution and not be contributing so many more weapons and so much more aid that they are in fact enabling Assad to double down," he said.

Russia has told the U.S. it was committed to helping create a transitional government, Kerry said, but has not delivered "the kind of effort to create the kind of dynamic by which that could be achieved."

Kerry's comments came after a second round of peace talks ended over the weekend with little progress. U.N.-Arab League mediator Lakhdar Brahimi apologized to the Syrian people as the talks wound down.

"I am very, very sorry, and I apologize to the Syrian people that their hopes which were very, very high that something will happen here," Brahimi said Sunday.

The talks' modest achievement has been a U.N.-brokered truce in the central city of Homs that has allowed aid workers to deliver some food and medicine for hundreds trapped in the rebel-held areas. More than 1,000 people were also evacuated from the city, which has been under government blockade for more than a year.

On Sunday, an official with the Syrian Arab Red Crescent said its workers have entered the western Damascus suburb of Moadamiyeh to deliver food for the first time in 15 months of government blockade.

Also Sunday, Kerry issued a statement praising the Syrian opposition for having a "mature seriousness of purpose and willingness to discuss all aspects of the conflict."

In contrast, Kerry said, "while [talks] stalled in Geneva, the regime intensified its barbaric assault on its civilian population with barrel bombs and starvation. It has even gone as far as to add some of the opposition delegates at Geneva to a terrorist list and seize their assets. This is reprehensible."

In response, Syrian Foreign Minister Walid al-Moallem accused the United States of trying to "create a very negative climate for dialogue in Geneva."

Syria's conflict started as largely peaceful protests against Assad in March 2011 but later degenerated into a civil war in which more than 140,000 people have been killed, according to activists.

The U.N.'s human rights office said in January it has stopped updating the death toll from the war, confirming that it can no longer verify the sources of information that led to its last count of at least 100,000 in late July.

Millions have been driven out of their homes, seeking shelter in neighboring countries and in safer parts of their homeland.

Washington, its European and Persian Gulf allies are backing the opposition in Syria's conflict. Russia and Iran are supporting Assad's government.