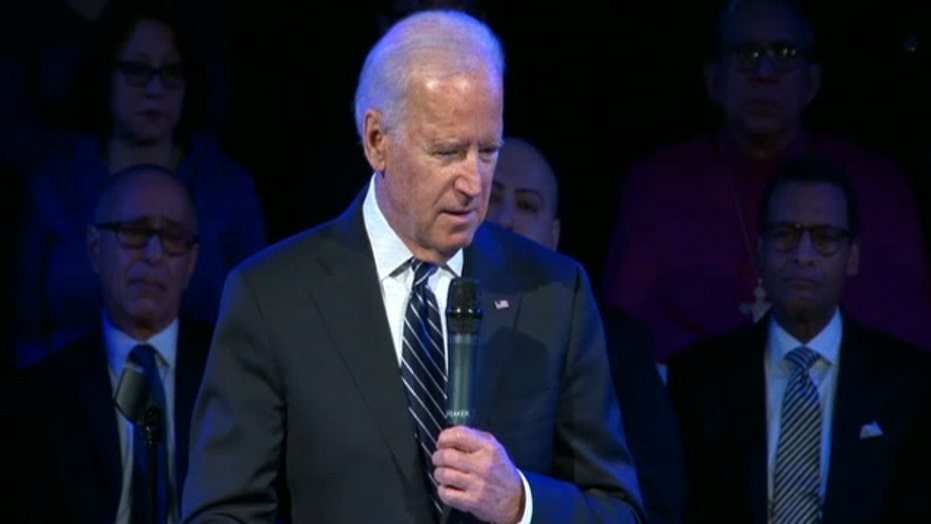 Vice President Biden speaks at the funeral for Rafael Ramos

“I’m sure I speak for the whole nation ... when I say to you our hearts ache,” Biden said during memorial services inside Christ Tabernacle Church, in Queens, N.Y. “Today we pay tribute to Officers Rafael Ramos and Wenjian Liu. We pay tribute to their families."

Biden, during his roughly 15-minute speech, only hinted at the racial tension across the country surrounding the deaths of Officers Ramos and Liu.

The two were fatally shot the night of Dec. 20 in their patrol car in Brooklyn by a gunman who suggested on social media that he was seeking revenge for the deaths of two unarmed black males who died as a result of two separate encounters this year with police officers.

“This is not a black America or a white America or a Latino America or an Asian America,” said Biden, paraphrasing the words of President Obama, who attended Columbia University in New York. “This is the United States of America.”

The first family is on a two-week vacation in Hawaii.

The deaths of the two black males has re-ignited a national debate and protests about race relations in the U.S. and police departments’ interactions with members of black communities across the country.

Teenager Michael Brown died in August when shot by a white police officer in Ferguson, Mo., during an encounter.

Eric Gardner, 43, died in July in Staten Island after an officer pressed a police baton across neck in an effort to arrest him. A video of the incident resurface after Brown’s death.

Ramos is survived by wife Maritza and two sons, Justin and Jaden.

Biden twice said that he spoke from experience when saying that reassuring words in the early aftermath of such a loss offer little comfort.

In 1972, his first wife and 1-year-old daughter died from injuries sustained in a car accident.

“There is little anyone can say or do at this moment to ease the pain, that sense of loss, that sense of loneliness,” Biden said. “Maritza, I know from experience there are no words I can offer.”

He received whispers of affirmation for saying “Police officers and police families are a different breed. Thank God for that.”

The biggest applause followed Biden saying that the New York City Police Department was probably “the finest police department in the world.”

He added: “When you patrol the streets on New York, you circle the earth.”

Hundreds of police officers from across the county attended the ceremony, at which New Gov. Andrew Cuomo and Mayor Bill de Blasio also spoke.

Cuomo lauded New York police officers for their restraint while being the “target of false and abusive chants” in the aftermath of Brown and Gardner's deaths.

“What a beautiful testimony to their profession,” said Cuomo, urging New Yorkers to heal from their losses, as they did after the 9/11 terror attacks.