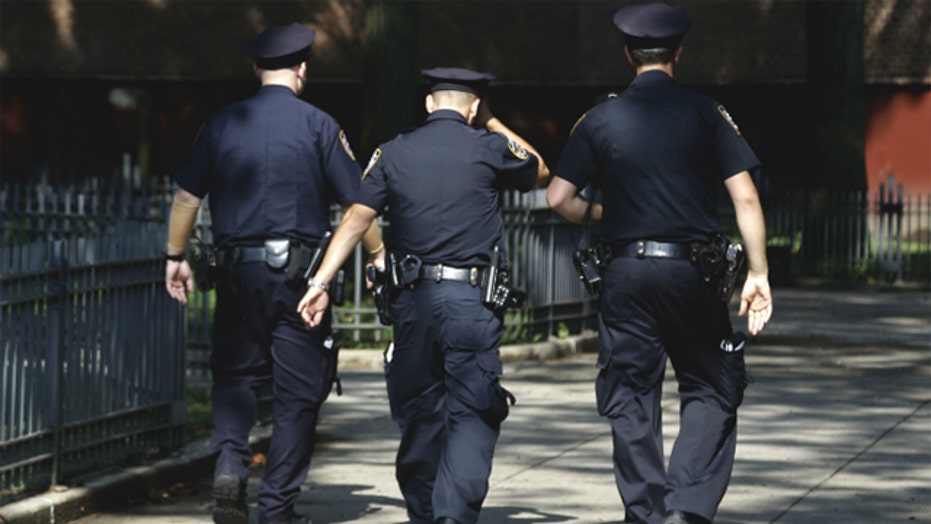 How police officers should proceed amid NYPD tension

New York City Mayor Bill de Blasio on Monday moved to quell a growing firestorm in his city and in his administration in the wake of the execution-style murders of two city police officers, urging angry union leaders and others to "put aside" the political debate for now -- as the police commissioner publicly defended the mayor.

"We have to move forward," de Blasio said. He said earlier that the political debate will be dealt with "in due time."

Bratton, who appears to be playing the role of intermediary between union leaders and the mayor's office, said he spoke with leadership of all the police unions, and claimed they have agreed on "standing down" until after the funerals of the officers.

"I want to thank them for that action," he said.

Bratton also jumped to de Blasio's defense, suggesting the criticism from the unions is "not new."

"Can you point out to me one mayor that has not been battling with the police unions in the last 50 years? Name one," Bratton said.

De Blasio also lashed out at one reporter who asked about some of the inflammatory anti-police protests in the city, in the days preceding the murders. De Blasio said some in the media "enable" those who seek conflict, and suggested most protests were peaceful.

But the comments over the weekend from union leaders amount to some of the harshest directed at this mayor since he took office.

The accusations started flying almost immediately after authorities announced Saturday that officers Rafael Ramos and Wenjian Liu were fatally shot by a gunman who later killed himself. The suspect, 28-year-old Ismaaiyl Brinsley, had posted on Instagram that he was "putting wings on pigs" and suggested he was motivated by the deaths of Eric Garner and Michael Brown at the hands of police officers.

"There's blood on many hands," Patrolmen's Benevolent Association President Patrick Lynch said late Saturday. "... That blood on the hands starts on the steps of City Hall in the office of the mayor."

Lynch and other officer organizations roundly condemned those who "incited" protests over the Garner and Brown deaths, and pointed the finger at the mayor's office. That night, a widely circulated video showed officers turning their backs on the mayor as he walked down a hall where the officers had been pronounced dead.

From his opposition to stop-and-frisk policies during his mayoral campaign to more recent comments about how he wanted his biracial son to be careful around police, the mayor's record on law enforcement is now front and center.

The fallout has even prompted a petition on Moveon.org calling for de Blasio's resignation -- so far, it has gathered nearly 60,000 signatures.

Some, including the mayor, have suggested the union criticism goes too far. The temperature of the debate might be dialed down in the coming days, if the union leaders adhere to their supposed agreement with Bratton to stand down until after the funerals.

But the murder of Ramos and Liu nevertheless has blown open a rift with the police force unlikely to heal soon. The police unions already were at odds with de Blasio over, among other issues, his handling of the response to the Garner case -- Garner died in a struggle with police after being approached for selling loose cigarettes, but no officer was charged.

The de Blasio administration allowed days of demonstrations and drew criticism from union leaders for his comments during that period -- including saying his family had to "train" their biracial son how to act around police.

"I don't put the blood of these police officers on the mayor's doorstep," former New York City Mayor Rudy Giuliani told Fox News on Monday. "I lost police officers, Bloomberg lost police officers. What I do hold him responsible for is letting those demonstrations get out of control. ... He's guilty of creating an atmosphere of police hatred in certain communities."

He accused de Blasio, President Obama and others of fueling an "atmosphere of hate" toward officers.

"We have supported our police officers and our law enforcement personnel from the time I have gotten here," Cole said.