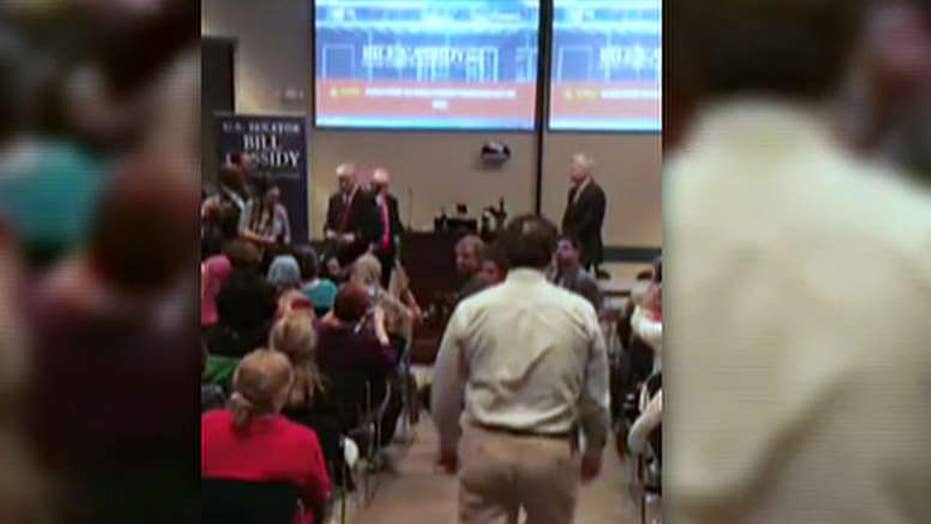 A group of enraged protesters exploded in anger after a chaplain prayed in the name of Jesus at a town hall meeting in Louisiana hosted by U.S. Sen. Bill Cassidy.

The verbally-abusive crowd also heckled a Vietnam War veteran who attempted to lead the group in the pledge of allegiance.

It was one of the most heinous acts of un-American, anti-Christian behavior I’ve ever seen, folks.

Louisiana State chaplain Michael Sprague and the unidentified Vietnam War veteran should be commended for maintaining their composure in the face of such verbal barbarism.

Click here to learn how to stand up to the liberals! Get Todd’s latest book, “The Deplorables’ Guide to Making America Great Again”

The mainstream media would have us believe the unruly demonstrations are part of an organic, grassroots effort.

But I sincerely doubt many in the mob were actually residents of Louisiana – because I know the good people of Louisiana and nobody behaves like that in the Bayou State.

Folks are raised right in Cajun Country. There’s no way anybody would embarrass their mommas by acting the fool in public.

I’d be willing to bet a cup of Community Coffee that the Jesus-hating rabble-rousers were shipped in from some God-forsaken place like Berkeley or Brooklyn.

Chaplain Sprague had barely invoked the name of the Almighty when the heckling began.

“Pray on your own time. This is our time,” someone shouted. “Amen. Let’s get on with it.”

Others chanted, “Separation of church and state” and so on and so forth. Someone filmed the prayer and words do not do justice to the amount of hate directed at the chaplain.

But they became absolutely unhinged when he concluded his prayer in the name of Jesus.

“Wow, they booed the name of Jesus,” Cassidy said in remarks reported by the Times-Picayune.

I thought several of the agitators were going to spontaneously combust.

The chaplain said the overwhelming majority of people in the room were causing a disruption – but he harbors no ill will toward the mob.

“I’m not mad at people. My heart is bigger than that,” he said. “My heart’s prayer is that everybody be treated with dignity and respect.”

The chaplain was especially disappointed by how the mob insulted the Vietnam War veteran.

“There was a lot of shouting. Some turned their backs. Many didn’t stand or put their hand on their heart,” he said.

Infuriating, but not surprising

As I wrote in “The Deplorables’ Guide to Making America Great Again” liberals have a strong aversion to President Trump, Jesus and Old Glory.

But I still have hope in America.

I am hopeful, but to be honest – it would take a miracle of biblical proportions.