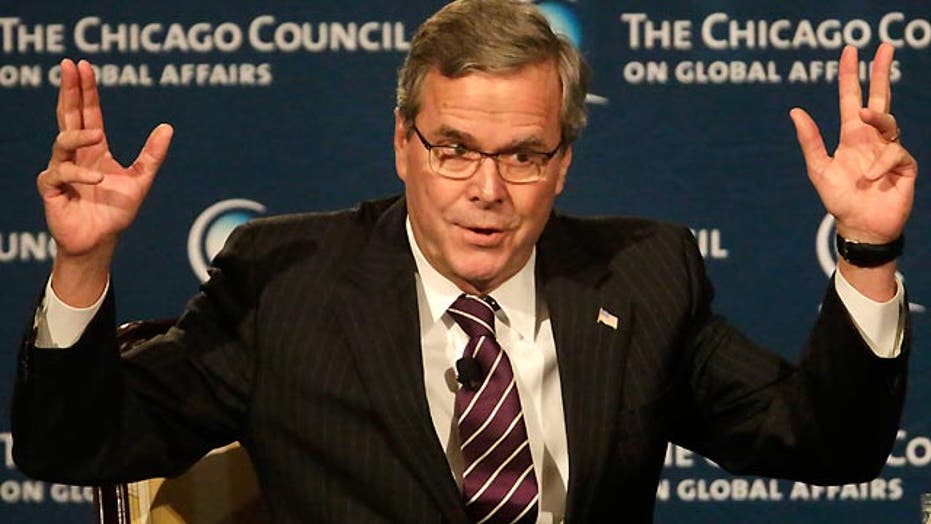 Can Jeb Bush distance himself politically from family?

I am wary of the adjectives Republican presidential candidates like to place in front of the word “conservative.” George W. Bush ran as a “compassionate conservative,” though after 9/11, when his administration turned from domestic policy to national security, he became better known as a neoconservative.

John McCain was a “maverick conservative” and Mitt Romney, a pragmatic businessman without a clear political philosophy, tried to market himself as “severely conservative.” And now comes the leading candidate for the 2016 Republican presidential nomination, Jeb Bush, who has styled himself a “reform conservative.”

Richard Nixon popularized the classic Republican campaign strategy: first run to the right to secure the party’s nomination, then run toward the center to win the general election. But today’s Republican presidential candidates apparently feel the need to build all that ambiguity into their stance from the start.

Yes, I’m a little bit right, but also leaning into the center. But it doesn’t really work. It leaves conservatives rightly feeling like they’re being served conservatism lite: a third less calories than your regular conservatism but also less filling. And in the general election, the adjectives disappear anyway as the liberal opponent attacks the noun: he’s a conservative.

So now I am wary about Jeb Bush proclaiming himself a reform conservative in his big speech in Detroit recently. I get the reform part—his two signature policy platforms have been education reform and immigration reform. But his positions on those issues are not classically conservative. His idea of reform conservative feels a little to me like one of those oxymorons: jumbo shrimp or virtual reality. The dictionary definition of reform is suitably vague: making changes in order to improve something. In that sense, everybody wants to reform something. But what is conservative reform, and is that what Jeb Bush is really about?

To me, Bush’s idea of reform conservatism sounds more like big government conservatism. Take education reform for example. For Bush, who famously led such reforms as governor of Florida, it meant more government testing and accountability. It was related to his brother’s No Child Left Behind and Common Core, movements under fire among conservatives for turning K-12 education, the classic responsibility of state and local government, over to the feds. If not a philosophical dilemma, this is at least a political problem for Bush, since polls show conservatives overwhelmingly (94% accordingly a Pew Research Center poll) oppose things like the Common Core curriculum. A Bloomberg/Des Moines Register Iowa poll of likely 2016 caucus participants shows nearly 2/3 feel Bush’s positions on immigration and education reform are problematic to them.

And let’s face it, big government conservatism did not work well for Jeb’s dad and brother. George H.W. Bush, seeking a “kinder and gentler nation,” ended up with sufficient government growth that he turned his back on his no new taxes pledge and was voted out of office. Similarly, George W. Bush’s No Child Left Behind and Medicare prescription drug coverage have grown into expensive federal expansions. So conservatives are right to be wary of Jeb Bush’s reform conservatism turning out to be another form of big government conservatism—essentially using the federal government for conservative policy ends, rather than limiting government power and size.


There is a more promising version of reform conservatism promoted by some young intellectuals and policy thinkers. Their view is that conservatives need to demonstrate more specifically how conservative ideas about free markets actually help the middle and lower classes better than an overgrown welfare state. They are enamored of using subsidies, tax credits and other government tools to help middle-income households, especially. One thing they have right, I think, is that the heart of conservatism, individual liberty, has become an abstraction and people need to see how it matters in their lives. But, at this point, these ideas are more of a conversation than a movement, and are not yet ready for a prime time race to the White House.

Barry Goldwater, in some ways the father of the political conservative movement, spent a lot of time and energy countering the influence of the Eastern liberal Republican establishment and remaking the party in a more conservative image. My fear is that all these adjectives attached to conservatism today will lead us back toward a form of big government Republicanism, not forward toward greater liberty.

David Davenport is a Research Fellow at the Hoover Institution.