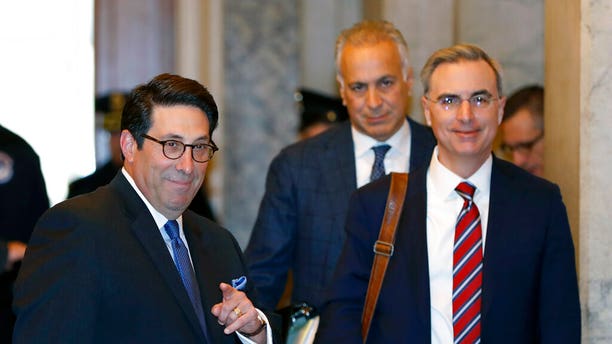 Good morning and welcome to a very special weekend edition of Fox News First. Here's what you need to know as you start your Saturday ...

Trump's lawyers are expected to insist the president did nothing wrong when he asked Ukrainian President Volodymyr Zelensky to investigate potential 2020 election opponent Joe Biden. They have suggested they will argue that he acted well within his presidential powers and will portray him as constantly under siege by foes obsessed with undoing the results of the 2016 election or ensuring his defeat in November.

“It's not a rebuttal, but what we are going to do is attack --  attack all of the misstatements,” Trump lawyer Jordan Sekulow previewed Friday on “Fox and Friends.” “We're going to make the case for the president, why the president was totally within his constitutional rights."

Senate Majority Leader Mitch McConnell said Saturday’s session will begin at 10 a.m. ET and run “for several hours.” A source on the president's legal team told reporters they expect the sessions to be short, possibly two to three hours. They suggested it will be an "overview of coming attractions" with the "bulk" presentation coming Monday. That's when this source says they'll get into the "nitty-gritty."

Asked how much the Trump defense team will talk about the Bidens, the Trump legal team source said the House made them part of the case, so "we'll have to be addressing that."

On Friday, three days of opening statements from the Democrats ended in fireworks as impeachment manager Rep. Jerrold Nadler, D-N.Y., labeled the president a “dictator” in fiery remarks. Click for more on our top story.

TUNE IN: Stay with Fox News for live team coverage of President Trump's Senate impeachment trial on all platforms

Fox News Exclusive: Trump to his Senate trial defense team: ‘Just be honest, just tell the truth'
President Trump told Fox News' "The Ingraham Angle" in an exclusive interview Friday that his defense team in the Senate impeachment trial merely has to "be honest" in laying out the case for why he shouldn't be removed from office before calling the proceedings a "fraud."

"What my people have to do is just be honest, just tell the truth," Trump told Raymond Arroyo at the March for Life rally in Washington. "They’ve been testifying, the Democrats, they’ve been telling so many lies, so many fabrications, so much exaggeration. And this is not impeachable." Click here for more.

Also from the interview: Trump says he appeared at March for Life because “religious liberty is under siege.”

Coronavirus death toll rises to 41 in China, nearly 1,300 sickened
The death toll from the coronavirus that began in China and has since spread to several other countries, including the United States, rose to 41 while the number of confirmed cases increased to nearly 1,300, authorities said Saturday.

The National Health Commission reported a jump in the number of infected people to 1,287 with 41 deaths, according to The Associated Press. The latest tally comes from 29 provinces and cities across China and includes 237 patients in serious condition. All 41 deaths have been in China, including 39 in Hubei province, the epicenter of the outbreak, and one each in Hebei and Heilongjiang provinces. Wuhan, where the outbreak began, is located in Hubei, and 572 cases alone have been reported from there.

Meanwhile, a second person tested positive for the virus in the U.S. An Illinois woman in her 60s had recently traveled to Wuhan and arrived back home on Jan. 13. She reported possible symptoms a few days later and was admitted to a hospital. Click here for more.

Fox News digital politics editor Chris Stirewalt argues that the encounter between an angry dad of a college student and Sen. Elizabeth Warren, D-Mass., further shows how she is the "great bust" of the 2020 election cycle.

Fox News First is compiled by Fox News' Bryan Robinson. Thank you for making us your first choice in the morning! Enjoy your Saturday! We'll see you in your inbox first thing Sunday morning.