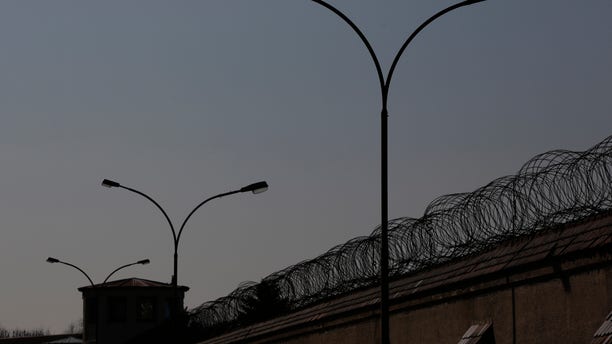 LANDSBERG AM LECH, GERMANY - MARCH 14: Barbed wire on the walls of the Landsberg prison, where Uli Hoeness will presumably serve his sentence, is seen after the announcement by Uli Hoeness that he has resigned as club governing board chairman and will not appeal the three and half year jail sentence handed down by a Munich court the day before on March 14, 2014 in Landsberg, Germany. A judge found Hoeness guilty of evading taxes totaling at least EUR 27.2 million and declared his pre-emptive attempt at turning himself in to German tax authorities as invalid. Hoeness has been a pillar in German football club history, beginning with his career as a stellar professional player with FC Bayern in the 1970s to his role as FC Bayern club chairman, during which the Bundesliga team has been among the most successful in Germany. (Photo by Philipp Guelland/Getty Images) (2014 Getty Images)

The Homeland Security Department released 36,007 convicted criminal immigrants last year who are facing deportation, including those accounting for 193 homicide and 426 sexual assault convictions, according to new federal data.

The immigrants released had completed their criminal jail sentences and nearly all still face deportation and are required to check in with immigration authorities while their cases are pending.

The data from U.S. Immigrations and Customs Enforcement were first disclosed by the Center for Immigration Studies, a conservative group that advocates for less immigration. In its own report, the group said "the vast majority of these releases from ICE custody were discretionary, not required by law ... nor the result of local sanctuary policies." It did not describe how many immigrants ICE decided on its own to release and how many a judge ordered to be released.

An ICE spokeswoman, Barbara Gonzalez, said Friday that in many cases cited in the report the agency was required by law to release the immigrants while their deportation cases are pending.

"The releases required by court decisions account for a disproportionate number of the serious crimes listed in the report," she said. Gonzalez said, for example, that mandatory releases account for over 72 percent of the immigrants convicted of homicide.

Homeland Security Secretary Jeh Johnson and his predecessor Janet Napolitano have repeatedly said that deporting those immigrants who pose a threat to national security or public safety is Homeland Security's top priority. And ICE has routinely touted increases in the number of convicted criminals removed annually. Last year, the agency said 59 percent of the 368,644 people removed had been previously convicted of a crime.

But the releases that weren't mandated by law, including 28 percent of the immigrants with homicide convictions, undermines the government's argument that it uses its declining resources for immigration enforcement to find and jail serious criminal immigrants who may pose a threat to public safety or national security.

Details of how many criminal immigrants were released in the last year come amid a months-long review of the Obama administration's deportation policies by Johnson.

Johnson has not said when he expects that review to conclude, but in an interview Thursday with PBS' "NewsHour" program he did say a program used to identify potentially deportable immigrants in local jails needs a "fresh start." The Secure Communities program has been widely criticized by immigration advocates who said it too often swept up immigrants accused of only traffic violations or other minor offenses.

Republican lawmakers decried the releases as evidence the Obama administration is not fulfilling its duty in immigration enforcement. In a joint statement, Republican Reps. Bob Goodlatte of Virginia, chairman of the House Judiciary Committee, and Lamar Smith of Texas, said the disclosure was "incredibly alarming"

"Most could be detained by immigration enforcement authorities if the administration had the will to do so," they said. "These criminals should be locked up, not roaming our streets."