Uganda Attack May Have Been 'Plan B' for Terror Strike on World Cup, Expert Says 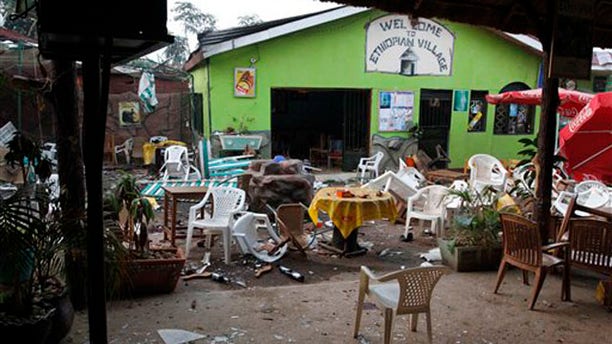 Damaged chairs and tables are seen among the debris strewn outside the restaurant "Ethiopian village" in Kampala, Uganda, July 12 after an explosion at the restaurant late Sunday. (AP Photo)

The deadly twin bombings in Uganda's capital may have been the "Plan B" for terrorists looking to make a strike on the World Cup but unable to penetrate South Africa's security, a terror expert who had earlier warned Congress about such an attack told FoxNews.com.

The Al Qaeda-linked Somali group al-Shabab on Monday claimed responsibility for the attack, which left dozens dead including at least one American. It marks the first time the militant group -- which is labeled a terrorist organization by the State Department -- has struck outside Somalia.

The attack targeted spectators watching the final match of the World Cup and effectively made the small African country the latest front in the ever-expanding terrorist battlefield.

But Ronald Sandee, director of analysis and research with The NEFA Foundation, said that Uganda, while of strategic significance to al-Shabab, may not have been the primary target. He told FoxNews.com that he shared intelligence with Congress in May that warned about the "serious threat" of a terror attack during the World Cup. While that never materialized in host country South Africa, Sandee said stepped-up security there may have compelled a group like al-Shabab to find a new, softer target.

"This was probably Plan B," he said. Sandee said intelligence sources he's regularly in contact with have told him that while al-Shabab has taken responsibility, Al Qaeda operative Harun Fazul is suspected of playing a role.

Uganda is no stranger to extremist activity. Maj. Gen. Edward Kale Kayihura, the inspector general of the Uganda Police, said there have not been any recent attacks of this magnitude in Uganda, but that al-Shabab has made recent threats.

An intelligence source noted that al-Shabab has been threatening to target the countries that supply African peacekeeping forces in Somalia and that Al Qaeda tried blowing up the U.S. Embassy in Uganda at the same time as the Kenya and Tanzania embassy attacks in 1998. The source said the double bombing is straight out of the Al Qaeda handbook and that it would not be surprising if Al Qaeda were connected in some way.

A 2008 report also said that a number of suspects had been picked up in Uganda on suspicion of having ties to Al Qaeda, though most of them were later released. Among the countries they were from were Somalia and Pakistan.

The Obama administration on Monday offered to join forces with the Uganda government to investigate the twin bombings.

"The president is deeply saddened by the loss of life resulting from these deplorable and cowardly attacks, and sends his condolences to the people of Uganda and the loved ones of those who have been killed or injured," White House spokesman Tommy Vietor said in a written statement. "The United States is ready to provide any assistance requested by the Ugandan government."

President Obama called the Ugandan president Monday and is in touch with the U.S. Embassy there, as well as the FBI, regarding requests for assistance from the government, according to the White House. The State Department said a three-person FBI team is on the ground and that additional agents are available.

Five U.S. citizens are known to have been injured in the attack. An American aid worker was also killed in one of the strikes.

It's unclear whether Westerners were specifically targeted, but one of the sites was a restaurant known to be frequented by foreigners. That's where the American was killed. The U.S. also is involved in Uganda training the military for those peacekeeping duties in Somalia and elsewhere.

Secretary of State Hillary Clinton condemned the attacks and said the U.S. Embassy is trying to assist the injured Americans.

"At this tragic moment, the United States stands with Uganda. We have a long-standing, close friendship with the people and government of Uganda and will work with them to bring the perpetrators of this crime to justice," she said.