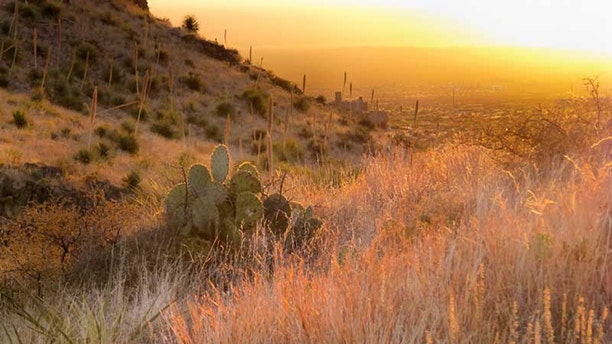 President Barack Obama on Wednesday declared almost a half-million acres of rugged desert terrain along the U.S.-Mexico border as a national monument, marking the largest swath of land to be set aside for that purpose since he took office.

While praised by environmentalists, the move is generating criticism from some lawmakers in the West and local law enforcement agents who see Obama's use of power as a threat to security in a region where the influence of Mexican drug cartels, human smuggling and illegal immigration are all apparent.

House Speaker John Boehner and others also complained that the designation of the Organ Mountains-Desert Peaks National Monument in southern New Mexico is the latest example of Obama taking unilateral action to sidestep Congress.

"Once again, the president has chosen to bypass the legislative branch — and, in this case, do so in a manner that adds yet another challenge in our ongoing efforts to secure our southern border," Boehner said. "At a time of continued cartel violence in Mexico, we should not be putting any additional restraints on efforts to protect our borders."

Officials with U.S. Customs and Border Protection said the designation will not limit their ability to perform the agency's mission along the border.

The campaign by environmentalists, hunters and tourism officials to gain wilderness protection for the Organ Mountains and Desert Peaks has dragged on for a decade, with numerous versions introduced by the state's delegation over the years.

New Mexico Sens. Tom Udall and Martin Heinrich, both Democrats, had most recently proposed legislation to protect the region, which includes hunting areas and features rock outcroppings, petroglyphs, ancient lava flows and sites such as Billy the Kid's Outlaw Rock and Geronimo's Cave.

After hosting a series of public meetings, the senators amended their proposal to include a buffer zone for law enforcement. With Wednesday's proclamation, critics say there are no provisions to allow for local law enforcement to patrol the area.

Dona Ana County Sheriff Todd Garrison recalled the times his deputies and federal agents were shot at as they pursued suspected drug smugglers through the area. He also talked about stolen cars that were used to ferry drugs through the desert and past border patrol checkpoints.

"If we have no ability to patrol that area, crime is going to increase. It will be akin to the Organ Pipe National Monument in Arizona. I wonder how many years it will be before we have to post signs that say 'Enter at your own risk,'" Garrison said.

U.S. Rep. Rob Bishop, R-Utah, was among those who sent letters to Obama asking him to refrain from establishing the monument. Bishop said letting the legislation work its way through Congress would have allowed for border security concerns to be addressed.

"His decision stands, and now we have to go back in and try and fix it. That is just a backward way of trying to have good government," Bishop said. "Originally the Antiquities Act was used to try and preserve stuff. These recent presidents are abusing the process to make a political statement, not to save anything."

Republican Rep. Steve Pearce, whose congressional district covers the region, had proposed a designation for just 55,000 acres. He said years of work went in to developing a plan that would be acceptable to ranchers, business owners, sportsmen and conservationists. He said Obama ignored that "with the stroke of a pen."

Udall and Heinrich said Wednesday they will continue their legislative push to establish wilderness areas within the new monument and to release the restrictions that come along with such areas to give Border Patrol agents more flexibility.

Supporters of the Organ Mountains-Desert Peaks monument say setting aside the area could generate $7.4 million in economic activity from visitors and business opportunities. They say the designation could also lead to more federal funding and staffing for the Bureau of Land Management and the Border Patrol to enforce rules throughout the area.

"When you don't have enough management and staff that's always a problem, but also it's hard to control when the public doesn't value the resources," said Oscar Simpson with Backcountry Horsemen of New Mexico, one of the groups supporting the monument. "It's all an education process. It's making people understand these are really unique things and you need to protect them."