Two amateur treasure hunters were sentenced Friday to lengthy prison terms for stealing millions of dollars worth of 1,100-year-old coins. The coins date back to the period when the Anglo-Saxons were battling Vikings for control of England.

British metal detectorists George Powell, 38, and Layton Davies, 51, dug up the 300 coins along with gold and silver jewelry in 2015 on farmland in central England but never reported it. That reporting is a legal requirement.

Prosecutor Kevin Hegarty said the coins were estimated to be worth $3.9 million to $15.4 million. 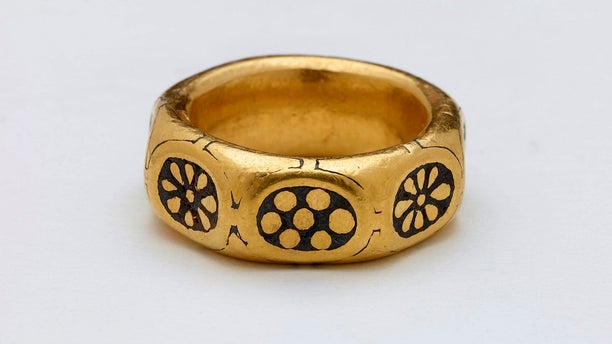 This undated handout photo provided by the British Museum shows a gold ring from the ninth century which was part of a million-dollar Viking hoard that metal detectorists George Powell and Layton Davies have been convicted of stealing. (British Museum via AP)

The archaeological wonders are believed to have been buried by a member of the Viking army that was being pushed across England by Saxon forces.

It “represents a nationally important assemblage created at the very point England was forming and becoming a nation with a single identity under the vision of (King) Alfred the Grea,” Hegarty said.

In a Worcester Crown Court, Powell was sentenced to 10 years for the theft and Davis was given more than eight years.

Judge Nicholas Cartwright said had the pair reported the find, they would have received a third to half of its value. 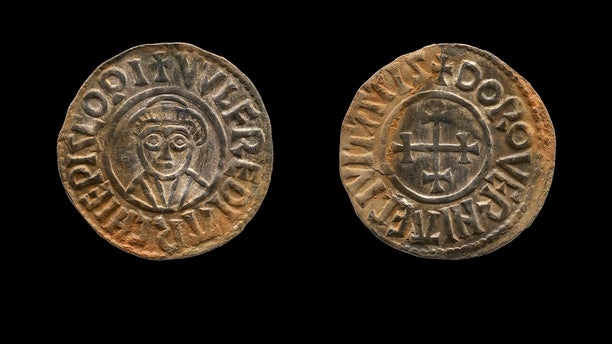 Two amateur British treasure-hunters, George Powell and Layton Davies have been imprisoned for stealing a hoard of 1,100-year-old Anglo-Saxon coins and jewelry valued at millions of dollars. Experts say the hoard, much of which is still missing, could shed new light on a period when Saxons were battling Vikings for control of England. (British Museum via AP)

Both men instead tried selling the coins through antique dealers. Some of the jewelry and some 30 coins have been recovered.

Powell’s lawyer, James Tucker, described the coins as a temptation that became a curse. He said his client  “wishes he had never found the treasure.” Two other men were convicted with helping to conceal the treasure.