Presidential candidate Michael Bloomberg on Sunday, the day before the national holiday honoring Martin Luther King Jr., spoke out against racial income inequality in America, as the billionaire Democrat outlined an economic proposal aimed at increasing the financial opportunities for black communities across the nation.

Visiting the Vernon African Methodist Episcopal Church in Tulsa, Okla., the site of a race massacre nearly 100 years ago that left hundreds dead and the city’s thriving African American community in rubble, he said his plan to close the wealth gap between the races included a $70 billion investment in the nation’s most disadvantaged neighborhoods.

Bloomberg described the initiative as a “plan for righting what I think are historic wrongs and creating opportunity and wealth in black communities.”

The plan offered incentives for investment in underserved communities, increases support for black-owned banks and ties federal housing money to progress in reducing segregation. It would require bias training for police, teachers and federal contractors, and address voter disenfranchisement practices such as ID requirements, poll purging and gerrymandering. 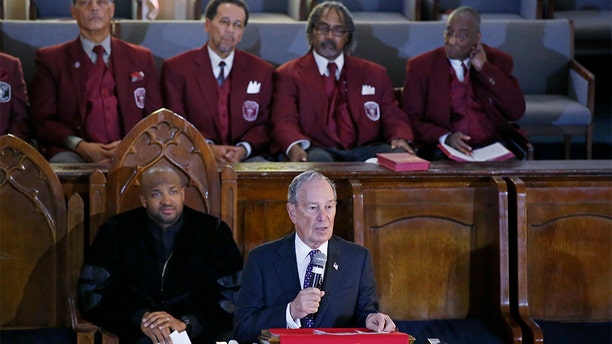 Presidential candidate Michael Bloomberg speaking during a service at the Vernon American Methodist Episcopal Church in Tulsa on Sunday, as the Rev. Robert Turner looked on. (AP Photo/Sue Ogrocki)

The former New York City mayor said his plan was to build a more equal society.

“As someone who has been very lucky in life, I often say my story would only have been possible in America, and that’s true,” Bloomberg said at the center. “But I also know that my story might have turned out very differently if I had been black, and that more black Americans of my generation would have ended up with far more wealth, had they been white.”

He noted that one of his earliest memories in life was sitting at the kitchen table, watching his father write a check to the NAACP: “I remember asking him: Why are you giving the money? And I never forgot what he told me. He said: ‘Because discrimination against anyone is a threat to everyone.’”

He said his family faced discrimination for being Jewish in New York: “I didn’t know it at the time, but when my parents moved to the house I grew up in, the owners wouldn’t sell to them. They didn’t want a Jewish family in the neighborhood. Luckily for us, our Irish lawyer was willing to buy it and transfer it to my parents. But if my mother and father had been Black, we would not have been so lucky. And we would not have grown up in that neighborhood.”

Bloomberg also apologized again for police stop-and-frisk policies while he was in charge of America’s largest city.

“Now, as all of you know, in my determination to reduce gun violence, we employed a common big city police practice called stop and frisk, and that resulted in far too many innocent people being stopped. And when I realized that we took action,” he said.

“I was wrong not to act faster and sooner to cut the stops, and I've apologized to New Yorkers for that, but for not for the better understanding the impact it was having on black and Latino communities. I've always believed, though, that leadership involves listening to diverse opinions and acknowledging when you didn't get them right and learning from it. And that's what I've always tried to do,” he added.

Bloomberg also pledged to back a commission to study whether black Americans should receive reparations for slavery.

Bloomberg also acknowledged that while he believed states had the right to set school curriculum, he will emphasize the importance of teaching slavery from an enslaved person’s perspective in all schools: “There's one of a curriculum change that we will encourage, and I think it's long overdue. I believe that all students should be taught the history of slavery from the experience of enslaved people.”

The center in Oklahoma where Bloomberg spoke houses artifacts and other memorabilia from the 1921 Tulsa race massacre, in which white mobs killed an estimated 300 black residents and injured 800 more.

About 8,000 residents were left homeless after firebombs, including some dropped from airplanes, destroyed movie theaters, churches and hotels and decimated the economic and cultural mecca that had become known as Black Wall Street.

The black community rebuilt in the decade that followed, but urban renewal programs in the 1950s and 1960s wiped out much of that progress.

Fox News' Kelly Phares in Tulsa, Ben Florance and The Associated Press contributed to this report.