Prince Harry and Meghan Markle's monumental "Megxit" was made with the couple and their son's safety in mind, a close pal of the prince now claims.

JJ Chalmers, 33, met Prince Harry when the two served in the military together. On Friday, Chalmers appeared on BBC's "The One Show," where he discussed how becoming a husband and father has changed the royal.

"He's less the captain in the army that I knew and he's more the father," Chalmers told the U.K. outlet, adding that the "first thing" the pals now talk about is fatherhood.

"When you look at the decision that he's made, I think at the forefront of that is to protect his family because the number one rule is to be a father and be a husband," the friend continued.

When asked by the host if the family's protection was what truly drove Harry and Meghan's royal exit, Chalmers said he believes that to be the case. 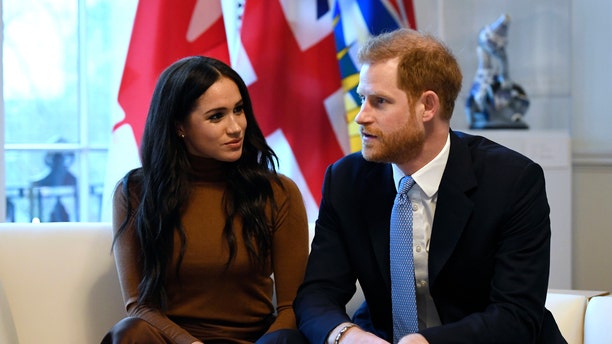 Meghan Markle and Prince Harry shocked the world on Wednesday with an announcement that they will be stepping down as "senior members" of the royal family. (Daniel Leal-Olivas/Pool Photo via AP)

"Particularly, he's a very principal individual so when he looks at the way that the media, for example, reacts or how social media talks about someone, he has to answer to his son one day when he begins to understand this and be able to look him in the face and say 'I made the right decision and I did right by you.' Ultimately, he grew up in the limelight and he knows how this can end if it's not handled correctly."

Harry, 35, and Meghan, 38, dropped a bombshell on Buckingham Palace and their respective families on Wednesday when they announced their plan to reduce their roles in the royal family, split their time between the U.K. and North America, and earn their own income.

"We have chosen to make a transition this year in starting to carve out a progressive new role within this institution," the couple shared in a statement. “We intend to step back as ‘senior’ members of the Royal Family and work to become financially independent, while continuing to fully support Her Majesty The Queen. It is with your encouragement, particularly over the last few years, that we feel prepared to make this adjustment."

The news sent shockwaves through the palace, who followed up shortly after with a statement of their own.