Demi Moore reiterated claims that her ex-husband Ashton Kutcher contributed to her breaking her 20-year sobriety by questioning whether alcoholism is even real.

The actress, 56, appeared alongside her daughters, Tallulah and Rumer Willis, on the most recent episode of Jada Pinkett Smith’s Facebook Watch series “Red Table Talk” and got candid about her life and her struggles with addiction.

“I opened that door to drinking after almost 20 years,” Moore told hosts Jada Pinkett Smith, Willow Smith and Adrienne Banfield-Norris. “I ended up pregnant and then I lost the baby at almost six months. When I couldn’t get pregnant again, the guilt that I felt, that it was clearly my fault, was just enormous.”

The actress explained that an offhand comment from Kutcher made her question her sobriety program.

“Ashton said, ‘I don’t know if alcoholism’s a thing. I think it’s about moderation,'” Moore claimed. “If I had stayed close to working my program ... I, of course, lived the majority of my adult life sober. I was great sober.” 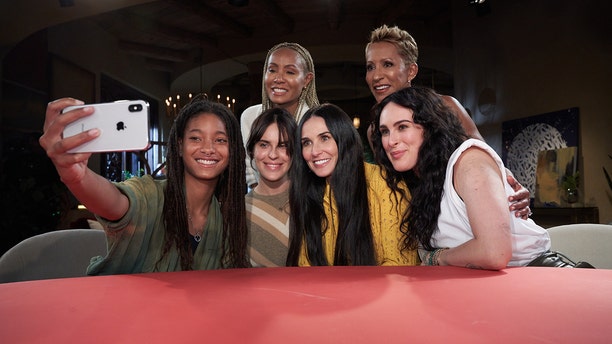 Demi Moore opened up about her sobriety on 'Red Table Talk.' (Photographed by Michael Becker)

Although it may sound like Moore blames Kutcher for falling off the wagon, she noted that the decision was ultimately hers.

“I made my own story up, that he wanted somebody that he could have wine with, that he could do stuff [with]. He’s not the cause of why I opened that door up,” she continued. “I wanted to be something other than who I am. And I gave my power away.”

Moore’s comments echo her tell-all book “Inside Out,” in which she told the story in a bit more detail.

“One night we put some clothes on and went out to dinner. Ashton was enjoying a glass of good red wine when he said, ‘I don’t know if alcoholism is a real thing. I think it’s all about moderation.'”

She continued: “I wanted to be that girl. The girl who could have a glass of wine at dinner, or do a tequila shot at a party. In my mind, Ashton wanted that too. So I tried to become that: a fun, normal girl.”