Actress Christina Hendricks is ready for a fresh start.

The "Mad Men" star, 44, stepped out for NBC and Vanity Fair's "Celebration of the Season" party in Los Angeles on Monday.

She donned a teal dress with black straps for the occasion. 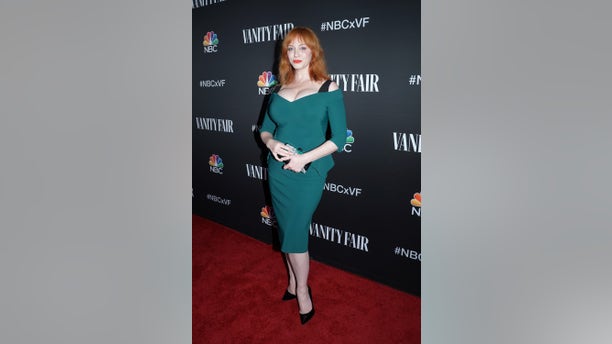 Hendricks announced the separation from her husband, Geoffrey Arend, in mid-October after 10 years of marriage.

"Today we take our next step together, but on separate paths," Hendricks and Arend, 41, said in a message that they both shared to Instagram. "We will always be grateful for the love we've shared and will always work together to raise our two beautiful dogs."

BRIGITTE NIELSEN CLAIMS SHE ONCE SLAPPED MADONNA IN 1987: 'SHE WAS VERY RUDE'

The statement went on to thank fans for their support, patience and space as the two actors "rediscover" themselves.

Hendricks was nominated for six Emmys for the role of Joan Holloway Harris on AMC's celebrated '60s drama, "Mad Men." Arend plays a supporting role in "Madam Secretary" on CBS.

Hendricks also stars in NBC's "Good Girls" and provided the voice of Gabby Gabby the doll in "Toy Story 4."