Palestinians protest US settlement policy shift in 'day of rage'

Thousands of Palestinian protesters took part in a "day of rage" across the West Bank on Tuesday, with some groups clashing with Israeli forces to protest U.S. Secretary of State Mike Pompeo’s announcement last week that the U.S. government will ease its stance on Israeli settlements.

Around 2,000 people gathered in the West Bank city of Ramallah by midday, where they set fire to posters of President Trump as well as Israeli and American flags. 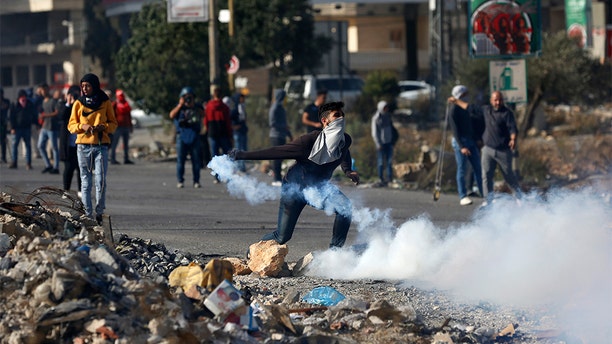 Palestinian demonstrator throws back tear gas fired by Israeli troops during the protest against the U.S. announcement that it no longer believes Israeli settlements violate international law., at checkpoint Beit El near the West Bank city of Ramallah, Tuesday, Nov. 26, 2019. (AP Photo/Majdi Mohammed)

Schools, universities and government offices were closed and rallies were being held in other West Bank cities as well.

Last week’s announcement that the U.S. no longer believes Israeli settlements violate international law was the latest move by the Trump administration to bolster Israel’s position and undermine Palestinian claims regarding land sought for a future state.

ISRAEL SHOOTS DOWN ROCKET FIRED FROM GAZA IN SECOND ATTACK IN ONE WEEK, RATTLING SHAKY CEASE-FIRE

"The biased American policy toward Israel, and the American support of the Israeli settlements and the Israeli occupation, leaves us with only one option: To go back to resistance," Mahmoud Aloul, an official with Palestinian President Mahmoud Abbas' Fatah movement, told the crowd in Ramallah on Tuesday.

Demonstrators held signs that said, "Trump to impeachment, (Israeli Prime Minister Benjamin) Netanyahu to jail, the occupation will go and we will remain on our land."

Netanyahu was formally charged last week in a series of corruption cases. 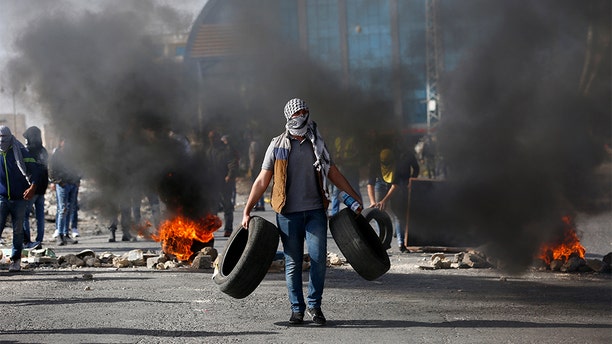 Palestinian demonstrators burn tires as they clash with Israeli troops during the protest against the U.S. settlement policy shift at checkpoint Beit El near the West Bank city of Ramallah, Tuesday. (AP Photo/Majdi Mohammed)

There were no immediate reports of injuries.

Israeli leaders welcomed the U.S. decision to ease its stance on Israeli settlements, including Netanyahu who called it “historic.”

The Palestinians and most of the international community have said the settlements are illegal and undermine hopes for a two-state solution by gobbling up land sought by the Palestinians.

Israel has said the fate of the settlements should be determined in negotiations.

Israel captured the West Bank and east Jerusalem in the 1967 Mideast war and quickly began settling the newly conquered territory. About 700,000 Israelis currently live in the two areas. 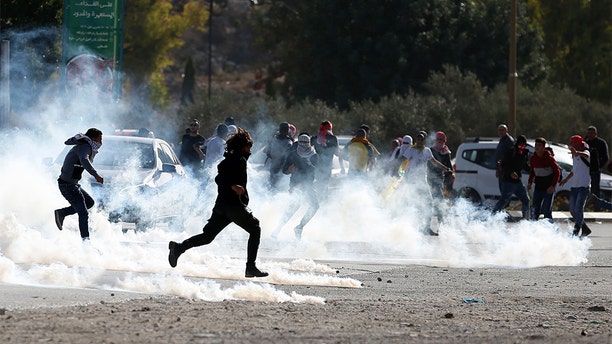 Palestinian demonstrators run from tear gas fired by Israeli troops during the protest against the U.S. announcement that it no longer believes Israeli settlements violate international law. (AP Photo/Majdi Mohammed)

Tuesday’s protests came just hours after the death of Palestinian prisoner Sami Abu Diak, 35, following a battle with cancer. Organizers had said the demonstrations -- which were planned before his death -- would also call for Abu Diak’s release from Israeli custody to allow him to die at his family's side. Israeli officials reportedly denied the request.

In a statement, Israel's prisons service said he was serving three life sentences for voluntary manslaughter and kidnapping, among other charges.

Abu Diak was allegedly involved in the killing of three Palestinians accused of collaborating with Israeli security forces and was arrested in the early 2000s, during the second Palestinian intifada, or uprising.

Previous deaths of terminally ill Palestinian prisoners have set off protests and accusations of medical negligence on the part of Israeli authorities.

Also, on Tuesday, the Israeli military said two rockets were fired from the Gaza Strip at southern Israel, adding that one was intercepted by an Iron Dome missile battery.

There was no immediate claim of responsibility for the attack, the second in one week, which rattled the shaky cease-fire brokered earlier this month that ended two straight days of fighting with Palestinian militants.

The Israel Defense Forces also reported a rocket attack on Monday, tweeting, “Nine days of calm between Israel and Gaza were just broken when a projectile was fired from #Gaza at #Israel. Thankfully, it landed in an open area.”