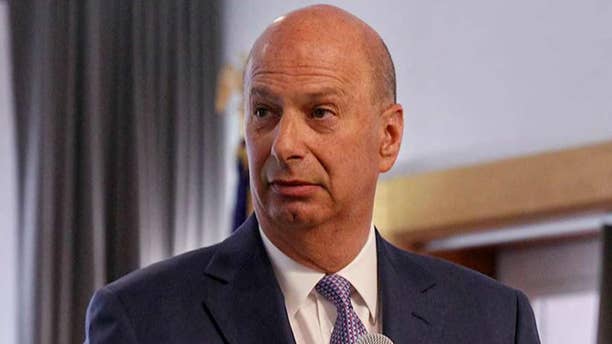 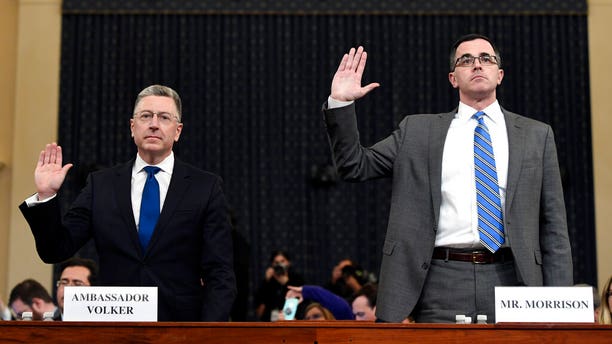 Ambassador Kurt Volker, left, former special envoy to Ukraine, and Tim Morrison, a former official at the National Security Council are sworn in to testify before the House Intelligence Committee.(AP Photo/Susan Walsh)

“Did anyone ever ask you to bribe or extort anyone at any time during your time in the White House?" House Intelligence Committee Ranking Member Devin Nunes, R-Calif., asked at one point in Tuesday's afternoon hearing.

Later, Rep. Elise Stefanik, R-N.Y., covered similar ground in asking Morrison and Volker about Trump's fateful July 25 call with Ukrainian President Volodymyr Zelensky. When asked whether there were indications of quid pro quo, bribery or extortion, they each repeatedly answered, "No."

The answers underscored a problem facing House Democrats in the second week of public hearings in their impeachment inquiry. With more witnesses testifying, more soundbites have emerged that may help Republicans and the Trump campaign argue that the proceedings were politically motivated theater, long in the works and foreshadowed openly by Democrats for months, if not years. Click here for a complete summary of Tuesday's testimony.

A 'Gordon Problem' for Democrats: Democrats' troubles with their case against Trump may continue Wednesday with Gordon Sondland, ambassador to the European Union and perhaps impeachment inquiry's most anticipated witness. Sondland repeatedly has frustrated Democrats' narrative by contradicting several other key witnesses in the probe. Sondland, critics argue, has a credibility problem. 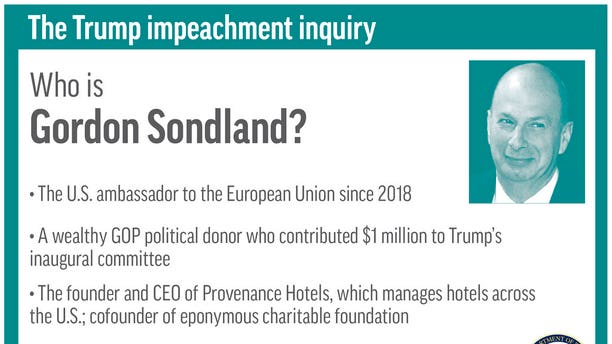 In a closed-door hearing, Sondland revised his prior testimony to say that he told a top Ukrainian official that U.S. aid would likely not resume until the country issues a corruption statement. Democrats quickly hailed the revelation as proof that Trump tried to pressure Zelensky into investigating Joe Biden's family business dealings in the country in exchange for the release of about $400 million in military aid. However, in prior testimony, Sondland said he had texted Ambassador Bill Taylor, the U.S. chargé d'affaires in Ukraine, that in September saying there was no quid pro quo. Click here for a complete preview of Wednesday's testimony. 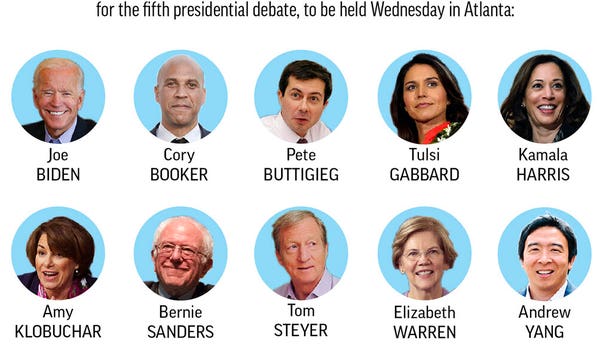 Wednesday's debate comes amid uncertainty over whether Democrats truly have a candidate who could defeat President Trump next November as former New York City Mayor Michael Bloomberg has seriously flirted with the idea of entering the race and former Massachusetts Gov. Deval Patrick declared his candidacy last week. South Bend, Ind. Mayor Pete Buttigieg may find himself under attack Wednesday night as he has surged in recent polls in Iowa, which holds the nation’s first caucuses in February.

Acquitted Navy SEAL faces review, potential loss of Trident pin, senior US defense official says
The top admiral in the Navy plans to announce a review in which peers will determine whether to remove SEAL Eddie Gallagher's Trident pin following his highly publicized war crimes case, a senior U.S. defense official told Fox News on Tuesday. The Trident is bestowed on SEALs to reinforce "good order and discipline" across the force, the source told Fox News.

Commander Nate Christensen, a spokesman for the Navy, told Fox News that the chief of naval operations, Adm. Mike Gilday, supported Rear Adm. Collin Green's decision to uphold a mitigated sentence against Gallagher, who was acquitted in July of killing an Islamic State fighter in Iraq. A San Diego jury sentenced Gallagher to a reduced rank and four months of confinement, which he has already served, for posing with the body of the dead ISIS fighter, which was considered the least egregious of the seven charges he was facing. President Trump signed an order last Friday reversing the sentence and ordering the promotion of Gallagher back to the rank he held before his trial.

Sean Hannity slams the public hearings in the Trump impeachment inquiry as an "embarrassing spectacle" for the country that is "blowing up" in Democrats' faces.