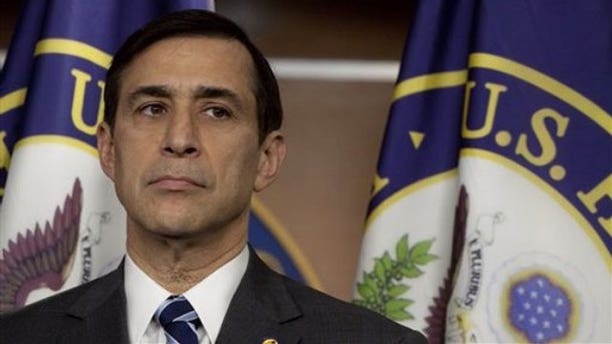 Rep. Darrell Issa, a prominent GOP leader, joined a growing list of conservatives trying to distance themselves from Michael Steele by declaring that the beleaguered chairman of the Republican National Committee "is not my leader" and "doesn't represent me."

Issa, of California, said in an episode of C-SPAN's "Newsmakers" to air Sunday that Steele should resign if he is not willing to speak for the "consensus" of the party.

"Michael Steele is supposed to reflect a consensus of Republican platform and policies," said Issa, the top Republican on the House Committee on Oversight and Government Reform. "If he does that, he certainly could remain. If he's not willing to do that, if he wants to be a political leader on his own, there's plenty of seats open in November. I'd suggest he run for one of them."

Steele has been under fire since last week for saying that Afghanistan was a "war of Obama's choosing." Prominent conservatives, including Bill Kristol and Liz Cheney, have called for Steele to step down.

But Steele said Thursday he "ain't goin' anywhere" in his first public remarks since the controversy erupted.

Steele added that stepping down from his post is a bad idea with November's general election just a few months away. "We have too much work to do," he said.

Although he didn't apologize for his Afghanistan comment, Steele affirmed his support for the war effort and told the crowd he is "foursquare, 1,000 percent with these troops on the ground ... and that should've been very, very clear."

He also joked about his outspoken nature, referring to it as his "individuality."

That individuality, he said, "you know, from time to time gets me in a little trouble, but that's OK, we understand how that works," Steele said to laughter from the volunteers.

In his remarks captured July 1 on camera and posted online, Steele criticized President Barack Obama and his handling of the Afghan war and suggested it can't be won. Republican officials later confirmed Steele made the comments at a Connecticut fundraiser, which was closed to the news media.

"If he's such a student of history, has he not understood that, you know, that's the one thing you don't do is engage in a land war in Afghanistan? All right? Because everyone who's tried, over a thousand years of history, has failed," Steele said in the remarks last week. "And there are reasons for that. There are other ways to engage in Afghanistan."

"This was a war of Obama's choosing," Steele said. "This is not something the United States has actively prosecuted or wanted to engage in."

Steele's gaffe was not his first. In the last year, he predicted the GOP won't win House control this fall and criticized fellow Republicans in a book that party leaders didn't know he was writing until it was published.

Republican Rep. Mike Coffman, who attended the Colorado event Thursday, was asked by reporters about Steele's Afghanistan comment and said, "I certainly wasn't happy about it." But after a private meeting with Steele, Coffman said he supports him staying in place.

"I think he should stay on. He gave me the confidence he can lead this party forward," said Coffman, who served with the Marines in Iraq, but added that Steele is charged with running the GOP, not making national defense decisions.