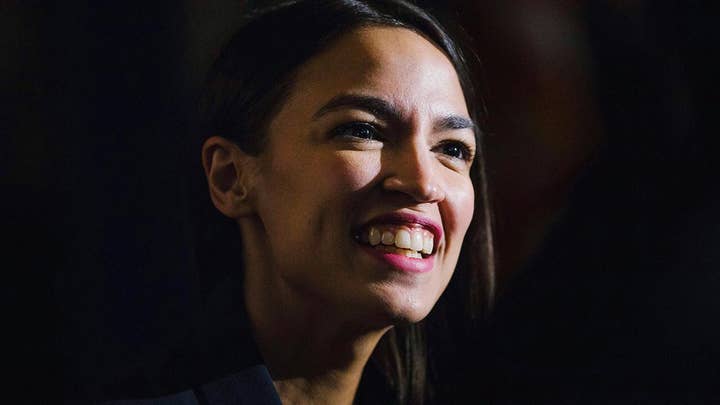 EXCLUSIVE -- Rep. Alexandria Ocasio-Cortez, D-N.Y., has been hit with another Federal Election Commission (FEC) complaint, this one alleging she and her campaign manager operated a “subsidy scheme” that ran afoul of campaign finance laws.

The crux of the complaint, which was given exclusively to Fox News in advance of its filing Wednesday, accused Ocasio-Cortez and her campaign manager, Saikat Chakrabarti, of overseeing a "shadowy web" of political action committees (PACs) that allowed them to raise more cash than they could have legally. It also alleged that a limited liability company (LLC) was created to avoid federal expenditure requirements by offering Ocasio-Cortez and other Democratic candidates political consulting services at a price so low that the company apparently shut down before the election was even over.

At the center of the complaint is Brand New Congress LLC, a now-defunct company owned by Chakrabarti that aimed to recruit up to 400 candidates for national office and “fully run all of their campaigns,” according to a post on the Justice Democrats PAC website.

“Chakrabarti was trying to create the Uber for politics,” said Dan Backer, the conservative attorney behind the complaint. “Uber functions because of a massive subsidy from venture capital. Here, it’s subsidized by these PACs to deliver a valuable service that people need and want, but can’t be delivered at the real cost of it.”

The Virginia-based attorney has made political hay with recent complaints against Ocasio-Cortez. This is Backer’s second FEC complaint against her in less than a month. He used the first as somewhat of a springboard to launch the Stop the AOC PAC, which he said has raised a few thousand dollars and conducted polling in her New York City district.

Both Ocasio-Cortez and Chakrabarti were named in the complaint. (AP Photo/Mark Lennihan, File)

Backer said Brand New Congress LLC was guilty of providing campaign contributions known as "in-kind" expenditures by only charging candidates for a portion of the total cost of the service. Essentially, Backer claimed the company operated at a loss to provide its approved candidates with campaign services on the cheap.

This was a problem, he said, because of a series of 1990s-era FEC Advisory Opinions which essentially explained that goods and services provided to political campaigns must be paid for at fair market value – otherwise they could be considered in-kind contributions.

It was unclear what Chakrabarti and Brand New Congress charged for their services -- and Backer said this was another part of the problem. He said the private company wouldn't be subject to the same disclosure and transparency laws that PACs are.

In a May 2018 blog post, the Justice Democrats PAC admitted it was offering services at a rate that would never turn a profit, and that was exactly the point.

"[The] goal of creating the LLC was not to make a profit," the post read, "and as such, we made our prices as low as possible while still satisfying the FEC's requirement that we are charging something reasonable because, again, if we weren't we would essentially be doing heavily discounted work for candidates and that is illegal and immoral since fighting dark money is literally what we want to do."

Also driving the complaint were the overlapping leadership roles of Ocasio-Cortez and Chakrabarti on the implicated organizations. Ocasio-Cortez was in charge of her campaign while simultaneously serving as a board member of the Justice Democrats PAC.

Her dual role isn’t unusual, according to Brendan Quinn, a spokesman for the Center for Responsive Politics. He said it hasn’t been out of the ordinary for members of Congress to sit on boards of multiple PACs, nor is it illegal or improper.

Backer said Chakrabarti, however, “was on all sides of the scheme.” He owned Brand New Congress LLC, sat on the board of the Justice Democrats PAC and co-founded the Brand New Congress PAC—all while serving as Ocasio-Cortez’s campaign manager.

Coming to a conclusion in the complaint may be a lengthy process, though.

“The FEC has only four commissioners out of its usual slate of six,” said Corey Goldstone, media strategist at the Campaign Legal Center, which identifies as a nonpartisan watchdog group. “Since federal law requires at least four votes on the six-member commission to take official action, the FEC can barely lift a finger even when violations are clear and obvious. In this case, it’s not clear there was any wrongdoing, and the allegations seem speculative. We haven’t seen evidence that the PACs improperly subsidized work for the campaign or have reason to believe that laws were broken.”

Backer said he expected the gridlock at the FEC and planned to sue if his complaints sit for 120 days and litigation is allowed under law.

“At the end of the day," Backer said, "It would be wonderful if the FEC would get off its dysfunctional ass and rule on these things."