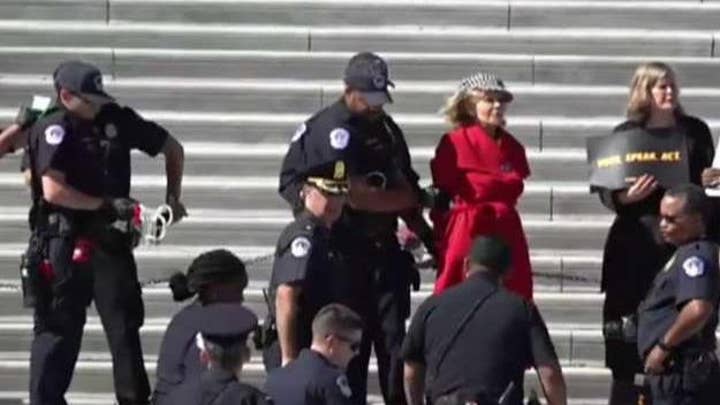 Actress and activist Jane Fonda was arrested again outside the U.S. Capitol building in Washington D.C. for protesting climate change, this time alongside her “Grace and Frankie” co-star Sam Waterston.

The 81-year-old actress is making good on her promise of doing it every week, as she was also nabbed last Friday along with 16 other people on the Capitol steps.

TMZ reports that Fonda was arrested again in the same location. This time, however, she had the support of the “Law & Order” and “The Newsroom” actor. The outlet shows video of both Fonda and Waterston being taken away in handcuffs.

The arrest comes after Fonda, a liberal Hollywood celebrity long known for activism and outspokenness, said she soon planned to leave Tinseltown and relocate to the nation’s capital, at least temporarily, inspired by young climate change activists.

Sam Waterston and Jane Fonda were arrested at a climate change protest in Washington D.C. (Photo by Jared Siskin/Patrick McMullan via Getty Images)

"So, I moved here to do an action every Friday called 'Fire Drill Friday' because Greta Thunberg says 'our house is on fire we have to behave appropriately,'” Fonda told reporters upon her release last week. "So, we have a fire drill every Friday and every Friday at 11:00 we will have a different focus on climate."

According to the Los Angeles Times, the 81-year-old actress had a goal in mind when she moved: to get arrested.

Fonda told the newspaper she planned to spend about four months in Washington for a series of sit-ins and rallies — after getting an OK from Netflix to take time off from her series “Grace and Frankie,” which she co-stars with Lily Tomlin.