David Beckham on pal Prince Harry: 'I'm proud to see him growing up'

David Beckham is happy for his royal pal Prince Harry.

Beckham, 44, spoke with Entertainment Tonight about Harry, 35, and his recent decision to "step back" as a senior member of the royal family and his part-time move to Canada with his wife, Meghan Markle, and 9-month-old son, Archie.

Beckham told the outlet that while he hasn't discussed the royal transition with Harry, he supports the prince as a father. 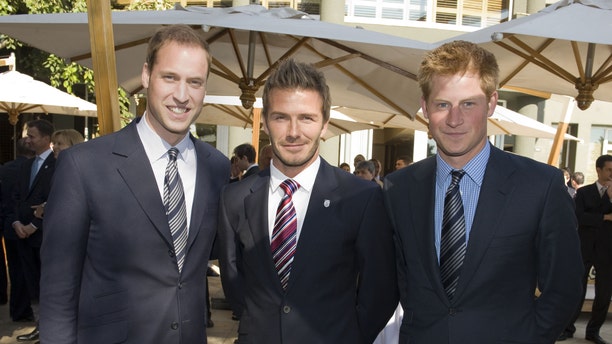 "I haven't spoken to Harry about him moving. We speak as friends and that's the most important thing for me," Beckham said. "I think he's enjoying being a young father for the first time and that's what we always spoke about. When you are a parent, it changes everything for you. He always needs to be happy."

Beckham said that he and his wife, Victoria, are proud of Harry and his adventures in fatherhood.

"We love him and he's an amazing person -- and that's the most important thing -- but I'm proud to see him growing up as an individual and being that person that every father wants to be," the soccer star -- who shares four children with Victoria: Brooklyn, 20, Romeo, 17, Cruz, 15, and Harper, 8 -- said.

He added: "Every father wants to be loving to their children and that's what I see with him."

Beckham, also a family man, said that his latest venture -- developing a new Major League Soccer team in Florida -- is partially motivated by his desire to make his own children proud.

"I like to feel that I still impress my kids all the time... We've always said that this is not a vanity project for us. This is a legacy," Beckham explained. "It is what we want to create for our children. We want our children to turn around in 10, 15, 20 years and say, 'Our dads built this.'"

He concluded: "We wanna make our families proud of creating something for them, for the future, and for the people of Miami and South Florida."