Christie Brinkley wants her younger fans to feel confident in their skin and she used an epic throwback photo of herself from the 1970s to get her point across.

On Monday, the 65-year-old blonde bombshell treated her half a million Instagram followers to a cover she shot for Cosmopolitan in 1977, in which she dons a very high-waisted purple bikini.

The model looks flawless as the bikini string is wrapped around her tight frame and she runs her hands through her short, wavy hair. But in a lengthy caption underneath the photo, Brinkley admitted just how body conscious she was at the time of the photoshoot.

"They did not have retouching back then so they really perfected the make up and every strand of hair. I remember I was worried that I looked fat," Brinkley confessed.

The seasoned model then shared how she feels about today's industry standards.

"I'm so glad that today our industry appreciates all shapes and sizes so we can just focus on being healthy. Not cookie cutter. Still there is something in some young girls that often makes them feel like they just don't measure up. I was one of them," she continued.

"I look back at these and think worry was such a waste of time. If only the perspective we gain with age that alleviates the worries, (sic) could be passed on and absorbed by the younger generation...but I do think shifting the focus to feeling great is a giant step in the right direction." 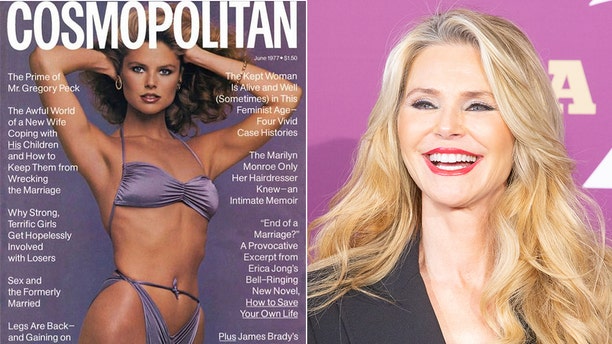 Christie Brinkley is still just as much a vision today as she was when she graced the cover of Cosmopolitan in 1977. (Cosmopolitan, Getty)

Fast-forward to today and Brinkley's confidence has paid off. The former supermodel is often praised for how she appears to have never aged and is told she looks like her 21-year-old daughter Sailor Brinkley-Cook's twin.

Earlier this month, Brinkley got real with her social media followers as she confessed she couldn't get her hair done and put her natural roots on display in a mirror selfie.

The picture caught the attention of Sailor, who commented, "Yas silver FOX."