Are Blake Shelton and Gwen Stefani getting ready to tie the knot?

According to "The Voice" contestant Rose Short, Shelton’s proposal is coming very soon.

“Let me tell you something: it’s coming. They had a moment,” Short revealed to Us Weekly at the Season 17 Top 11 Artists live screening and red carpet in Los Angeles on Monday.

“We were backstage getting ready and she was getting her makeup done. He stopped and it was like — so much going on that nobody saw it but me — but he was standing there and he looked at her like he was so proud. So, it’s gonna happen,” Short, 34, continued.

The major claim comes in light of Stefani shooting down engagement rumors in mid-November.

At the People’s Choice Awards in Los Angeles earlier this month, the No Doubt vocalist sported a huge diamond ring on the red carpet — sparking rumors of an engagement.

“It might be a real ring, a real diamond, but it's not a wedding ring. No, no,” Stefani told E! News.

“It actually doesn't fit over the glove on this hand so I put it on this hand. But good, right?” she continued.

BLAKE SHELTON CELEBRATES GWEN STEFANI'S 50TH BIRTHDAY ON SOCIAL MEDIA: 'I LOVE YOU SO MUCH' 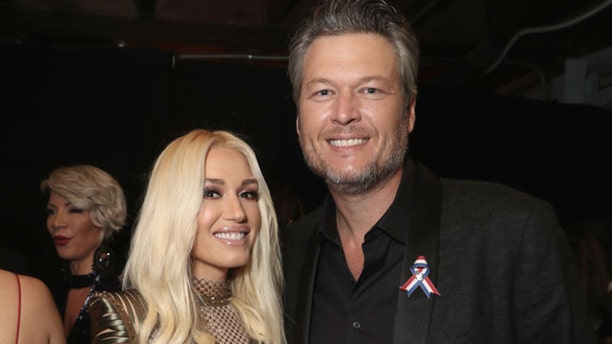 Gwen Stefani and Blake Shelton pose for a photo. (Getty)

“When I have something to say, I’ll say it,” she stated.

Shelton was previously married to country star Miranda Lambert from 2011 to 2015 and has been romantically involved with Stefani ever since the split.