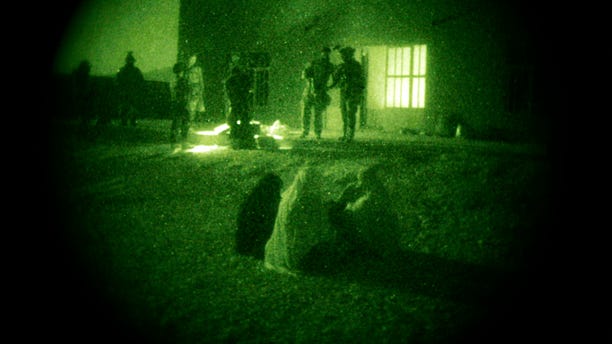 October 28, 2009: Afghan women and their children wait as U.S. Special Operations forces and Afghan National Army soldiers search their home during a joint operation targeting insurgents operating in Afghanistan's Farah province. Increased nighttime military raids by international military forces in Afghanistan have created a resentment that has undercut any battlefield gains from the tactic, according to a September 19 report by a U.S. think tank. (AP)

Increased nighttime military raids by international military forces in Afghanistan have created a resentment that has undercut any battlefield gains from the tactic, according to a report released Monday by a U.S. think tank.

The New York-based Open Society Foundations, founded by liberal billionaire George Soros, said in its report that NATO and U.S. troops have made important improvements in the way they conduct night raids following complaints from the Afghan government that its citizens were being treated unfairly or rudely. Civilian casualties are down, and the operations are better targeted.

However, the report says even nighttime raids conducted with the best practices breed discontentment and mistrust among both ordinary Afghans -- who feel less secure knowing that men in uniform might burst into their homes at any time. The Afghan government has repeatedly called for a reduction in nighttime operations over which it has little control and said such raids undermine efforts to reconcile with those who open to leaving the insurgency, according to the report.

The findings are potentially troubling for an international mission that is likely to depend even more on quick-strike operations like night raids as the U.S. and other troop-contributing nations draw down forces over the next few years.

Afghan President Hamid Karzai has publicly denouced nighttime raids in speeches and interviews, saying that the operations -- in which a small group of soldiers push into a compound and search the premises and the residents -- treat too many civilians as if they are insurgents and violate citizens' privacy in an intensely closed society. Troops on night raids are also regularly accused of mistreating women or defiling copies of the Quran. Though the allegations often turn out to be specious, they still damage the reputation of NATO troops.

International troops conducted an average of 19 raids a night between December 2010 and February 2011, according to NATO figures cited in the report. More up-to-date figures were not available but the researchers interviewed a NATO official in April who said that as many as 40 raids might take place on any given night in Afghanistan. That represents a sharp increase over the past two years, the report says.

"The escalation in raids has taken the battlefield more directly into Afghan homes, sparking tremendous backlash among the Afghan population," the report argues, adding, "Complaints over night raids have marred Afghan relations with international partners, particularly the United States, and have complicated long-term strategic partnership discussions."

A spokesman for NATO forces in Kabul said that night operations are always conducted along with Afghan forces and approved by Afghan officials. He said that the tactic continues to be one of the most effective ways to combat the Taliban insurgency.

"Night operations are an effective method of maintaining the pressure on the enemy while minimizing risk to innocent civilians," Lt. Col. Jimmie Cummings said. "Eighty-five percent of night operations are conducted without a shot being fired and account for less than 1 percent of civilian casualties."

Cummings said, however, that NATO forces are reviewing the report and is open to implementing any recommendations that will improve their operations in Afghanistan. He did not say if NATO was willing to sharply reduce raids.

The author of the report, Erica Gaston, said the increase in raids has come alongside an increase in insurgent attacks, meaning that Afghan citizens are not feeling any of security benefits from the operations.

"Afghan civilians are bearing the brunt of the surge in raids, without seeing security improvements," Gaston said in a statement.