The hero bystanders who subdued the London Bridge knife attacker included a chef who fought off the jihadist with an ornamental 5-foot narwhal tusk and another who brandished a fire extinguisher.

British media identified the chef as Lukasz, a man from Poland, who was injured by the assailant, convicted terrorist Usman Khan. Two were killed and three were injured in the attack before Khan was shot dead by police.

Following the attack, the Islamic State (ISIS) claimed responsibility for the attack but didn't provide any evidence, The Associated Press reported.

Lukasz worked at nearby Fishmongers Hall, where the horrific attack began during a prison rehabilitation event, the Sun reported, before spilling out on to the street.

Lukasz grabbed the tusk off the wall when Khan began slashing at people with a large kitchen knife. A narwhal is a type of whale sometimes known as the "unicorn of the sea" because of its distinct "tusk", which is actually a tooth. It can reach lengths of up to 10 feet.

His efforts were captured on video and posted on social media.

A co-worker told the London Times Luckasz ran towards Khan as he threated to set off an apparent explosive strapped to his body. 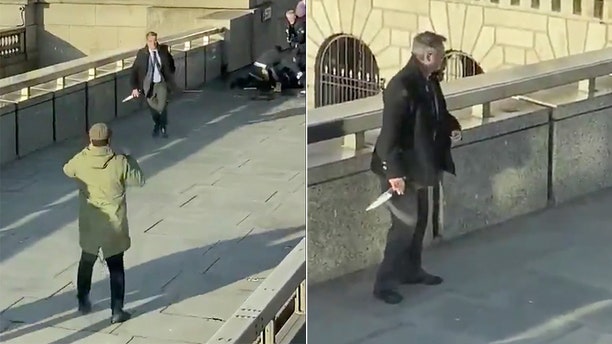 In these grabs taken from video made available by @HLOBlog, a bystander runs with a knife, after an incident on London Bridge. (@HLOBlog via AP)

He was “cut in the hand but not in critical condition,” the co-worker said. Police said the explosive vest was a fake.

“Being stabbed didn’t stop him giving him a beating,” the Times quoted the co-worker as saying. “Lukasz is a hero.” 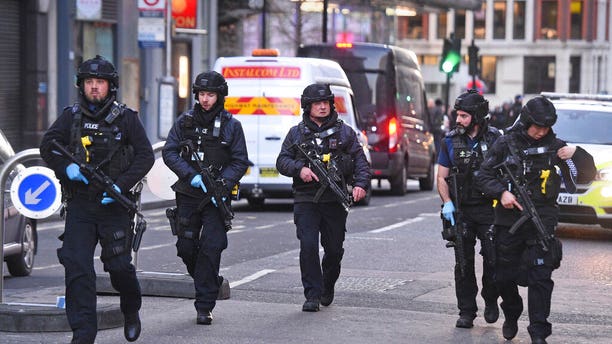 Police on Cannon Street in London near the scene of an incident on London Bridge in central London following a police incident, Friday, Nov. 29, 2019. British police cleared the area around London Bridge in the center of the British capital on Friday after a stabbing and shooting incident that left several people injured. (Kirsty O'Connor/PA via AP)

The two who were stabbed to death were a man and woman. The male victim was identified Saturday as University of Cambridge graduate Jack Merritt, who worked for a prison rehab nonprofit, the BBC reported.

David Merritt said of his son on Twitter that he was "a beautiful spirit who always took the side of the underdog," the BBC reported. "Jack spoke so highly of all the people he worked with & he loved his job."

Audrey Ludwig, who knew Merritt through work, said his "deep commitment to prisoner education and rehabilitation was deeply impressive."

Saturday afternoon, the Islamic State group claimed responsibility for the attack, saying Khan was one of its fighters. The group’s statement, however, didn’t provide any evidence, according to the Associated Press.

The Queen released a statement Saturday praising the bravery of the passersby.

“I express my enduring thanks to the police and emergency services, as well as the brave individuals who put their own lives at risk to selflessly help and protect others,” she said.

Sadiq Khan, the mayor of London, said he was in “awe of the people who ran toward danger to keep us all safe.”

He added: “They had no idea whether this man had a bomb you could detonate by pressing a button, they had no idea how many other people were involved. What do they do? They run toward him."

Meanwhile, Prime Minister Boris Johnson said it had been a "mistake" to grant an early release to the suspect. Khan, who lived in the Staffordshire area, was convicted in 2012 for "terrorism offenses". Authorities said Khan had been released in December 2018 "on license," meaning he had to meet certain conditions or face being sent back to prison, according to Metropolitan Police Counterterrorism Chief Neil Basu. 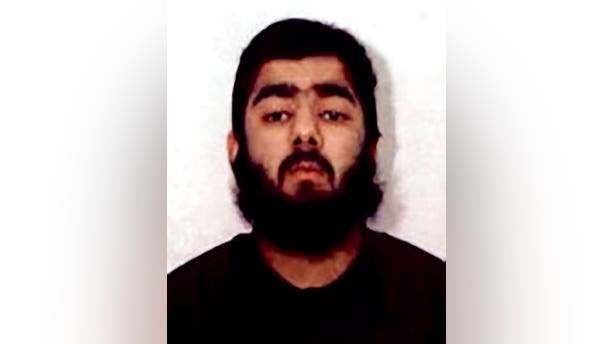 This undated photo provided by West Midlands Police shows Usman Khan. UK counterterrorism police are searching for clues into an attack that left two people dead and three injured near London Bridge. Police said Saturday, Nov. 30, 2019, Khan, who was imprisoned six years for terrorism offenses before his release last year stabbed several people in London on Friday, Nov. 29, before being tackled by members of the public and shot dead by officers. (West Midlands Police via AP)

Fox News' Melissa Leon and the Associated Press contributed to this report.