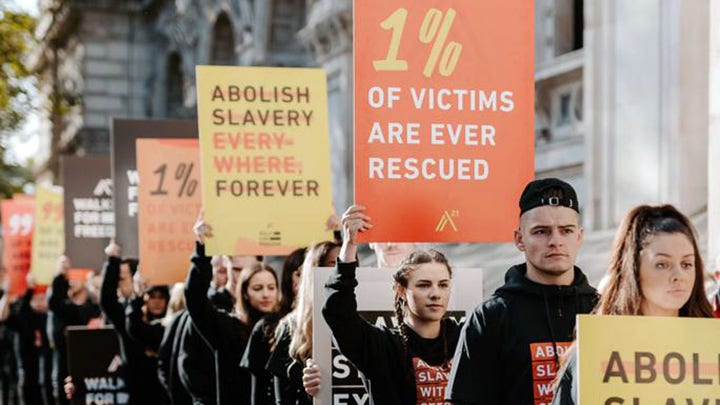 Thousands of people walked in over 500 cities across 50 countries this weekend to help end modern-day slavery, an estimated $150 billion industry that sees less than one percent rescued.

A21, a global anti-human trafficking organization, held its sixth annual "Walk For Freedom" Saturday. It was the largest one yet, as thousands of participants wore black shirts as they walked single-file through city centers, towns, and villages all over the world, raising awareness about the issue that goes largely unnoticed.

"Walk For Freedom reaches millions of people each year with an important message: slavery still exists, and it's happening on our watch," Christine Caine, A21 co-founder said in a statement.

A21 supporters participate in the "Walk For Freedom" Saturday in Stockholm, Sweden by dressing in black, holding signs that raise awareness about human trafficking, while silently marching in a single file line. (A21)

"There is so much power in gathering together, in showing up in force and saying, 'There are more of us against slavery than for it,'" Caine said. "By coming together, on one day around the world, we believe awareness will spread and lead to the identification and restoration of people who are being exploited in vast numbers."

The "Walk For Freedom" in Newcastle, United Kingdom. (A21)

Through fundraising and rallying everyday citizens around the cause, the Walk For Freedom helps with the identification and restoration of exploited people and helps them find freedom while bringing perpetrators to justice.

A21 -- which currently operates in 12 countries -- partners with other organizations, law enforcement, government entities, and supporters all over the world with a strategy to reach, rescue and restore.