Australian serial killer Ivan Milat, responsible for killing seven backpackers between 1989 and 1993 has died, according to Australian prison authorities. He was 74.

Milat had been in prison since 1994. He was diagnosed with esophageal and stomach cancer back in May, where he was given three months to live, according to News.com.au.

He reportedly died alone at 4:07 a.m. in the medical wing of Sydney's Long Bay Prison on Sunday. 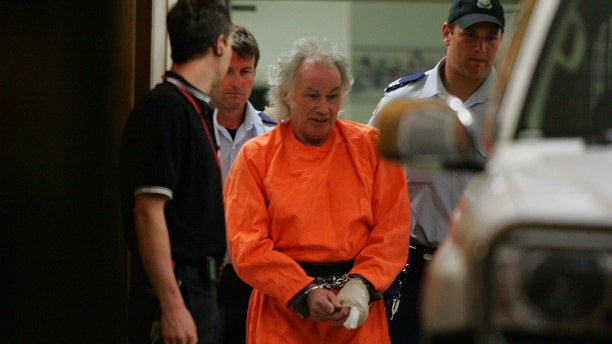 January 26, 2009. Goulburn, NSW - (EUROPE AND AUSTRALASIA OUT) Dressed in his orange overalls and handcuffed and with his left hand bandaged after cutting off his own finger and attempting to post it to the High Court. Ivan Milat was escorted out of Goulburn Hospital last night, and taken back to prison. (Photo by Gary Ramage / Newspix / Getty Images)

Considered by some as the most notorious serial killer in Australian history, Milat was convicted in 1996 of his gruesome crimes known as the "backpacker murders" and was given consecutive life sentences.

Milat kidnapped, shot, stabbed and murdered three German, two British, and two Australian backpackers - whose remains were found in makeshift graves in Belango State Forest of New South Wales - located roughly 93 miles southwest of Sydney. Many of the victims were gagged and bound and some were suspected of being sexually assaulted, according to the Guardian.

Milat was found to have murdered his victims after giving them rides while they were hitchhiking. He was arrested in 1994 thanks to the account of a British ex-army soldier who told authorities he had escaped an encounter with Milat who attempted to shoot him.

Even though there was overwhelming evidence of his guilt, Milat continued to claim his innocence in the ruthless murders, which police believed was just the tip of the iceberg.

They say his killing spree went beyond the Belanglo murders and that many of his victims remain on the State's missing person list, according to News.com.au. In 1974, he was accused and cleared of raping one of two hitchhikers he picked up three years earlier on the same highway as the backpacker murders.

The first Belanglo murders occurred in December 1989 when Milat abducted a pair of 19-year-olds from Australia - Deborah and James Gibson - stabbing them to death in Belanglo.

In 1990, he attempted to kidnap British ex-army soldier, Paul Onions, who managed to escape by jumping out of the vehicle once Milat pulled out ropes and a pistol.

In 1991, Milat murdered a German woman, Simone Schmidl, 20, who was hitchhiking up to meet her mother in Melbourne.

A year later, he abducted and killed German couple Gabor Neugebauer, 21, and Anja Habschied, 20. Gabor was shot six times in the head, while Anja was decapitated.

His final known murders occurred in April 1992 when he abducted a British couple, Caroline Clarke, 21, and Joanne Walter, 22, eventually shooting and stabbing them both. Their bodies were the first to be discovered five months later, according to news.com.au.

Police declared the murders as the work of a serial killer and set up a task force to uncover the person behind it. They received a lead in November 1993 when Onions called the police to describe his abduction by a man named "Bill," a cover name for Milat. He flew to Australia identifying Milat from a photo, according to the outlet.

More than 50 police officers surrounded the home of Milat where they took him into custody without incident.

He remained in prison ever since where he attempted to escape multiple times.

“These seven young persons were at the threshold of their lives, with everything to look forward to – travel, career, happiness, love, family, and even old age,” Justice David Hunt, who jailed Milat for life in 1996 told the Guardian.

“It is clear that they were subjected to behavior which, for callous indifference to suffering and complete disregard of humanity, is almost beyond belief," he added. "They would obviously have been absolutely terrified, and death is unlikely to have been swiftly applied."