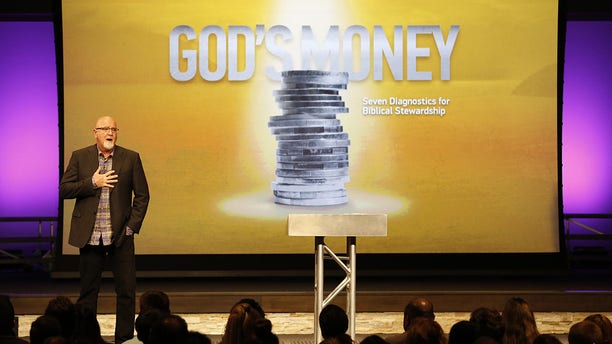 Pastor James MacDonald, the founder Harvest Bible Chapel, a megachurch located in the surrounding Chicago area, has been fired as a leader of the church.  (Stacey Wescott/Chicago Tribune/TNS via ZUMA Wire  )

The founder of a Chicago megachurch has been fired as its leader.

Pastor James MacDonald, of Harvest Bible Chapel, was given the boot last week by church elders after “highly inappropriate comments made by Pastor MacDonald were given to the media and reported,” the church said in a statement.

“Given that and other conduct under consideration, in accordance with the procedures in our Bylaws, Pastor MacDonald was removed as Senior Pastor and as an Elder of the church for engaging in conduct that the Elders believe is contrary and harmful to the best interests of the church,” the statement read. The church did not elaborate further.

MacDonald founded the church in 1988, and the megachurch has seven locations in the Chicago area and one in Florida, the Daily Herald reported. His two sons are on the church’s executive leadership board.

The pastor’s leadership has come under scrutiny recently, the Chicago Tribune reported.

MacDonald, who was known to be a charismatic preacher, was part of then-candidate Donald Trump’s spiritual advisory team but stepped down after the Access Hollywood tape was made public, the Chicago Tribune reported.

MORMON MISSIONARIES NOW PERMITTED TO PHONE HOME ONCE A WEEK

Ryan Mahoney and Scott Bryant, two of the five people who were sued for defamation by the church’s leadership, have been vocal opponents of MacDonald and have posted critiques of the pastor on a blog. The lawsuit led to the exposure of undisclosed information about MacDonald, which ultimately led to his termination, the Chicago Tribune reported.

Following the news of MacDonald’s termination, Mahoney and Bryant released a statement saying: “Seven years ago, we began to publicly air just a few of the stories that former elders and pastors had begun to share with us in private. While they did not allow us to share many of these stories, we published accounts and documents about finances, power and control as a means of pointing to the much deeper issues that were swirling around MacDonald and Harvest. As of the end of 2017, we felt that we had said all that we could to warn the people of Harvest about this toxic scenario.”

MacDonald was at first put on an “indefinite sabbatical” last month before he was fired. After he was put on leave, text messages and recordings were released on the Erich “Mancow” Muller’s radio show on WLS-AM 890 that appeared to capture MacDonald “disparage his critics.” Muller, who was once friends with MacDonald, accused the pastor of “running the church as essentially a giant Ponzi scheme,” the Chicago Tribune reported.