Trial is set to begin next week for Jeremy Christian, who is accused of killing two men who tried to intervene as he started screaming racial slurs aboard a Portland, Ore., train three years ago — an incident that spotlighted emboldened white nationalism in the liberal city.

Christian, 37, has pleaded not guilty to charges of murder, attempted murder, assault and other crimes in connection with the case. Prosecutors allege he shouted racist and anti-Muslim slurs at two young, black female passengers, including one Somali immigrant who was wearing a Muslim hijab.

As his outburst continued, Christian grabbed passenger Taliesin Namkai-Meche's cellphone and threw it to the ground. Authorities said another passenger, Micah Fletcher, who is white, stood up to intervene and got into a shoving match with Christian, who taunted the men to “do something” to stop him, according to court documents.

Christian took out a folding knife and stabbed Fletcher, 21, and Namkai-Meche, 23, prosecutors said. Authorities said he also stabbed a third passenger, Ricky Best, 53, who tried to intervene. Namkai-Meche and Best died at the scene from stab wounds to the neck. Fletcher was seriously injured but survived. 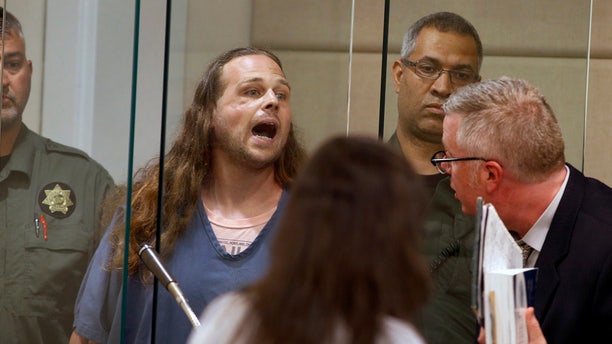 In this 2017 photo, Jeremy Christian shouts as he is arraigned in Multnomah County Circuit Court in Portland, Ore. (Beth Nakamura/The Oregonian via AP, Pool, File)

Christian stabbed the men 11 times in 11 seconds, officials said. He later told a court-appointed psychologist that he felt like he was on "auto-pilot." Surveillance video and cellphone cameras captured the incident.

Jury selection is set to begin Tuesday. The trial is scheduled for Jan. 28.

The stabbings' racially charged context was a blow for Portland, which prides itself on its liberal and progressive reputation, but also grapples with a past that includes limiting where black families lived and a neo-Nazi community so entrenched that it was once nicknamed, “Skinhead City.” The deaths also came weeks after a black teen was run down and killed by a white supremacist in a Portland suburb parking lot.

“The stabbings were felt deeply around Portland because so many people could imagine themselves on that train,” Lindsay Schubiner, program director at Western States Center, which tracks hate groups, told The Associated Press. “It felt like an attack on the entire city.”

In his first court appearance after the 2017 stabbing, Christian yelled to reporters, "Death to the enemies of America" and "You call it terrorism, I call it patriotism. You hear me? Die,” Portland’s KGW reported. In one bail hearing, he flashed a “Don’t Tread On Me” sticker across the courtroom toward Fletcher, who now bears a visible scar across his neck, Oregon Live reported.

Photos and video surfaced showing Christian recently had attended — and spoken at — a rally hosted by a far-right group called Patriot Prayer, whose periodic political events already were causing tension in the city. He was captured on camera making a Nazi salute while wearing an American flag around his neck and holding a baseball bat.  On Facebook, his prolific posts slammed Portland as a place so politically correct that his right to free speech was constantly under assault.

But Christian denied that he was a white supremacist in his interview with the mental health evaluator and said he reacted violently because he felt he was about to be beaten up, just as he had been attacked in prison, The Associated Press reported, citing court documents. A mental health evaluation unsealed by a judge six months after the attack said he showed signs of post-traumatic stress disorder, anxiety and social dysfunction made worse by stints in prison.

Christian also is charged with assault and menacing for shouting slurs and throwing a bottle at a black woman on another light-rail train the day before the stabbings. A judge last year dismissed charges of aggravated murder, a potential death penalty offense, because of a new Oregon law that narrows the definition of aggravated murder.