When cold winds blow across the Great Lakes, residents are often subject to the wintry form of weather known as lake effect snow.

According to the National Severe Storms Laboratory, lake effect snow does not come from a low-pressure system but instead has everything to do with how cold air interacts with the warmer water of the nearby lakes.

"As a cold, dry air mass moves over the Great Lakes regions, the air picks up lots of moisture from the Great Lakes," according to the NSSL. "This air, now full of water, dumps the water as snow in areas generally to the south and east of the lakes."

Between late fall and into winter, lake effect snow is common across the Great Lakes region when the cold air often from Canada moves in, especially in locations in Michigan, Ohio, Pennsylvania, and New York. 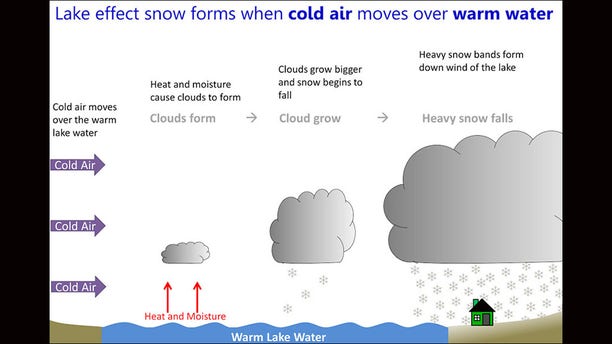 As the air rises and clouds form, they can produce a narrow band of precipitation that drops between two to three inches of snow per hour or more in locations, according to the National Weather Service. When someone ends up in a lake effect snow band, they can be faced with intense snow and limited visibility.

Determining where those narrow lake effect snow bands set up has everything to do with the direction of the wind, according to forecasters.

"Heavy snow may be falling in one location, while the sun may be shining just a mile or two away in either direction," the NWS states. "The physical geography of the land and water is also important."

Those long, narrow bands of snow can often be picked up on a satellite. 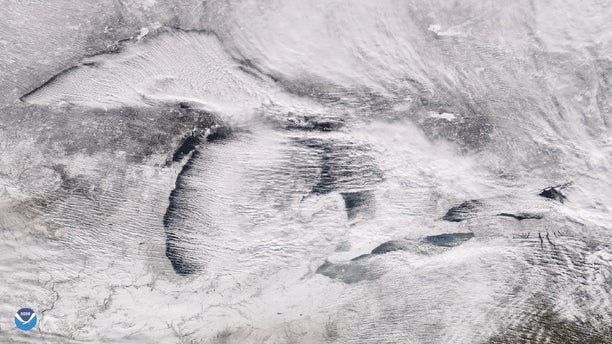 On Christmas Day in 2017, parallel rows of clouds known as "cloud streets" could be seen over the Great Lakes when record-setting snowfall of over 60-inches was recorded in Erie, Pa. over a two-day period.

"At times when there is a large temperature contrast between the surface air and lake water, these cloud formations can deliver heavy lake effect snows on the downwind shores of the lakes," the NOAA writes.

A "unique aspect" to lake effect snow (LES) is the "extreme variability" where a location can go from sunny skies to blinding snow in a matter of minutes, according to Bruce B. Smith, a meteorologist at the NWS forecast office in Gaylord, Mich.

"The variability of LES is of particular danger to motorists," Smith notes.

Lake effect snow tends to wind down around February when the lakes freeze over, which halts water from evaporating and stops the process, according to NOAA.