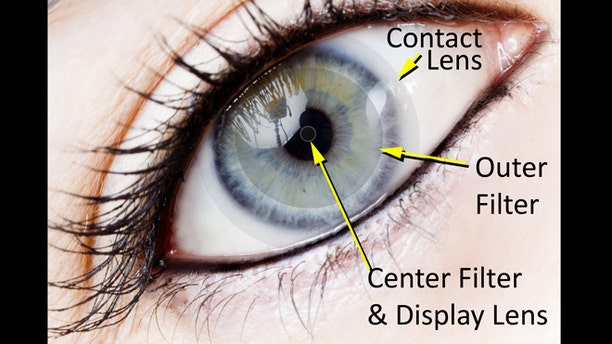 Supersoldier Captain America had amazing vision back in the 30s. modern soldiers may have just now caught up.

HUDs (head-up displays) that present a virtual TV screen to the viewer have become increasingly advanced and complex. But military models, notably bulky helmets for fighter pilots that overlay data on targets, are cumbersome.

A computer interface that’s entirely hands-free could give troops a clear advantage, the DoD thinks.

For example, soldiers, marines, airmen or seamen who need their hands free for weapons use could study a detailed map without toying with a handheld or dropping their gaze.  The DoD thinks the iOptik system could provide real-time feeds from satellites, drones or even a teammate’s helmet camera, displayed as if on a transparent computer screen to a fighter on the move.

Innovega’s iOptik contact lenses are intended to be fielded together with a far more compact HUD unit; picture Oakley sunglasses modified to allow the images to be projected onto them.

Innovega’s AR lenses work by using two different filters in each lens -- in effect the soldier can see through the data to the real world.

The system creates a dual-focus effect for the eye by sending light to different parts of the pupil; the retina sees both images in focus simultaneously. A data feed (or satellite feed, or map info or whatever) is sent from the center of each lens to the center of the pupil while light from the real world is directed by the outer part of the lens to the rim of the pupil.

The human eye has a restricted capacity to focus on nearby objects, leading to solutions that make data appear as if on a computer screen several feet away; Innovega’s iOptik creates the effect of viewing a 20-foot television at a distance of 10 feet.

The sense of 3D in the virtual display is created by projecting slightly varied pictures to each eye.

Innovega’s research, through funding from DARPA and the National Science Foundation, indicates that half of users would benefit from a prescription lens, so the company built that feature into the iOptik lenses as well. So they’ll sharpen your real world vision as well as give you super bionic sight.

The gaming world has also been busy advancing HUDs, but current approaches tend to rely on video eyewear that incorporates small flat panel displays that must be awkwardly aligned -- meaning bulky, uncool eyewear that obstructs the gamer’s view of the real world.

The company’s approach eliminates the optics entirely from the eyewear frame and utilizes transparent optics, so the wearer retains his peripheral vision.

In less than two years, the company expects to commence low volume production for the defense community … and hopes it will have a model for civilians with vision problems as well.

Innovega’s patents also include lenses that could be implanted in the eye. The company hopes to give cataract patients who need to have their lens replaced the option of choosing new lens that give them access to the Internet.

3D gaming, immersive video, augmented reality apps and mobile device interfaces are a few of the wider applications; the company hopes to license the technology so that gamers can expect the lenses may be available to the wider public as soon as 2014.

Innovega believes its high-tech contacts could becoming as ubiquitous as the iPhone. After all, 100 million Americans already use standard contact lenses, and 20 million of these folks are in the target 18- to 34-year old gaming and social media demographic.

The company believes iOptik will be the preferred platform for Google’s Project Glass as well, suggesting it will provide gamers with an improved immersive experience.

The technology does raise questions, of course. Will soldiers take to it or will data overload affect their ability to get the job done? And are such contact lenses safe to take into battle?

Fighters do require their full vision for situational awareness. But Innovega’s technology certainly holds promise -- enough that the Department of Defense was willing to take the gamble.

Will warriors do the same?