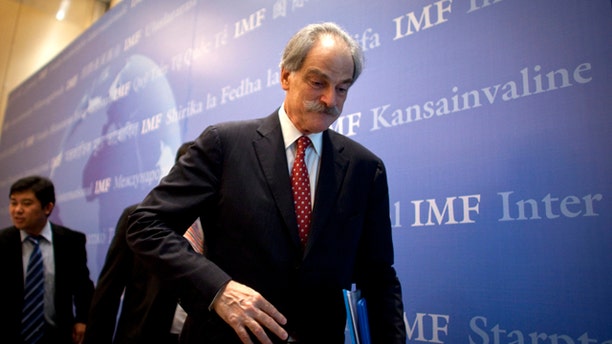 The International Monetary Fund (IMF) was Saturday investigating a recent cyber attack that hit its network, the latest in a series of high-profile hacking incidents against major corporations and institutions.

The fund declined to disclose the nature of the attack, whether its systems were infiltrated or whether any confidential information had been compromised. The extent of any infiltration remains unclear.

"We had an incident," said IMF spokesman David Hawley. "We're investigating it and the fund is completely functional." He said IMF staff received a "routine notification" about the incident by email Wednesday asking them to contact their tech department "if they saw anything suspicious."

The threat against the institution is the latest in a recent series as it responds to economic turmoil in several European nations. Earlier this month, the IMF said it had taken precautions after a group called Anonymous indicated its hackers would target the IMF website in response to the strict austerity measures in its rescue package for Greece.

The IMF has faced repeated cyber attacks in recent years. It routinely collects sensitive information about the financial conditions of its 187 member nations. Some data in its computer systems could conceivably be used to influence or trade currencies, bonds and other financial instruments in markets around the world.

The latest infiltration was sophisticated in that it involved significant reconnaissance prior to the attack, and code written specifically to penetrate the IMF, said Tom Kellermann, a former cybersecurity specialist at the World Bank who has been tracking the incident.

"This isn't malware you've seen before," he said, making it that much more difficult to detect. The concern, Kellermann said, is that hackers designed their attack to gain market-moving insider information.

The attackers appeared to have broad access to IMF systems, which would give them visibility into IMF plans, particularly as it relates to bailing out the economies of countries on shaky financial footing, Kellermann said.

The IMF spokesman would not comment on any specific details of the incident, which was first reported Saturday by the New York Times.

The attack on the IMF led the World Bank this week to cut a network link between the two institutions, even though the tie is not used for confidential financial information or other sensitive data. The IMF and World Bank, whose headquarters are next door to each other in Washington, D.C., work closely together on economic concerns of their member nations around the world.

A World Bank official said Saturday the network link with the IMF "involved nonpublic, nonsensitive information and it was cut out of an abundance of caution."

The network link between the two institutions has been severed before due to attacks against the fund.

Cyber threats against the fund have increased in recent years, particularly after the global financial crisis. The IMF has been heavily involved with European governments in bailing out Greece,

Ireland and Portugal as the nations struggle with sovereign-debt crises.