American Patrick Reed will have to look for another caddie for the final session of the Presidents Cup in Melbourne Sunday after his initial bag man got into a physical altercation with a fan after the previous day’s match and was subsequently dismissed by officials.

The PGA announced Saturday that Kessler Karain, Reed’s brother-in-law, would not return following an “incident” that involved Karain and a spectator.

“Following an incident that took place on Saturday at the Presidents Cup involving Kessler Karain and a spectator, Karain will not return to caddie for Sunday’s final-round Singles matches. We will have no further comment at this time,” the statement posted to Twitter read.

The PGA also released a statement on Reed’s behalf where he said he “respected the TOUR’s decision,” appearing to hint that he was not in line with it.

“We are all focused on winning the Presidents Cup tomorrow,” he continued.

Reed and Karain had been heckled for three days at Royal Melbourne before the Americans had felt that enough was enough, according to reports.

"As a caddie, one of your jobs is to protect your player. And unlike several other sports, in golf fans can get pretty close to Athletes," Karain said in a statement to ESPN. 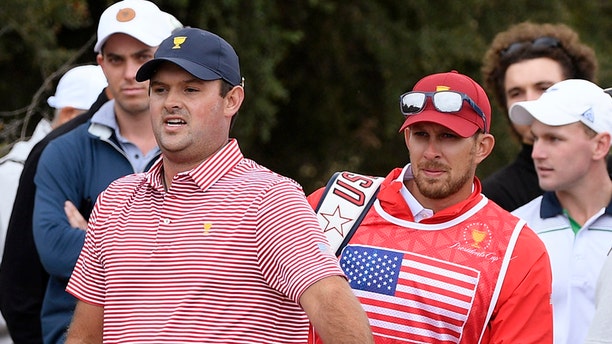 He said they were in their cart just a few feet away from the spectator who shouted at Reed “You f---ing suck.”

"I got off the cart and shoved him, said a couple things, probably a few expletives. Security came and I got back in [the] cart and left. I don't think there's one caddie I know that could blame me,” his statement continued.

Reed has been under heavy criticism following a rules violation last week in the Bahamas where he twice removed a clump of sand from behind his ball in a waste area at the Hero World Challenge. When he was shown the incident on video, Reed accepted the two-shot penalty.

Reed failed to make a birdie in fourballs Saturday morning as he and partner Webb Simpson lost for the third straight time.

U.S. captain Tiger Woods said the situation involving Reed, one of his four picks, was not a distraction.

“We came here as a team. We rallied around our teammate and we're excited about tomorrow.”