Analytics may have jumped the shark.

Houston Rockets star James Harden is known for being one of the most prolific scorers in the NBA, leading the league in scoring for the last two seasons.

When diving into Harden’s career stats at home vs. on the road, you would notice that his numbers away from his home court throughout his career are noticeably worse. On the road, Harden shoots 43.9 percent from the field, 35.5 percent from beyond the arc and averages 23.9 points per game. At home, he shoots 44.7 percent, 37.3 percent from long range and averages 24.9 points. 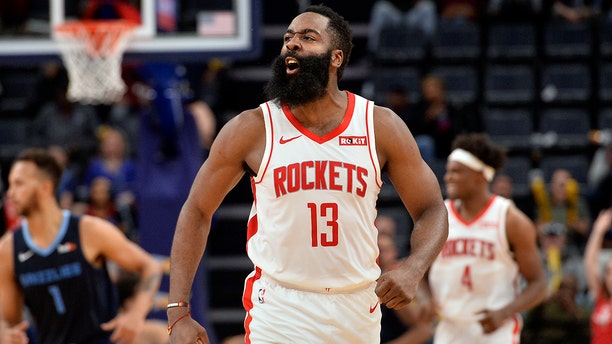 Houston Rockets guard James Harden (13) reacts after scoring a three-point basket in the second half of an NBA basketball game against the Memphis Grizzlies, Monday, Nov. 4, 2019, in Memphis, Tenn. (AP Photo/Brandon Dill)

Could it be that Harden just appreciates his home floor more 41 games out of the year? Or is there something else that has to do with his road numbers?

One industrious Redditor thinks they found the answer.

The Reddit user hypothesized that Harden’s performance on the road correlates to the quality of strip clubs in the city the Rockets are visiting. The user cross-referenced four seasons of data with the average review that appeared when they searched “[City] Strip Clubs.”

“I have proven, to a statistically significant degree, that James Harden’s game performance declines in cities with higher-rated strip clubs,” the person wrote.

Harden has been known to frequent strip clubs since he joined Houston in 2012. According to Complex, one dancer thanked Harden on Facebook over the amount of money he allegedly spent at one establishment. Another club reportedly had a Harden banner hanging there.

For what it’s worth, Harden and the Rockets played the Heat this season at the American Airlines Arena. Houston lost 129-100 and Harden had 29 points. It was his lowest total in a road game so far this season.

Houston plays Toronto on the road on Dec. 5.