CONCORD, N.H. – Vice President Pence blasted a new report Thursday that suggested he had considered supporting the use of the 25th Amendment to have President Trump removed from office.

And on the day that a State Department aide detailed to the vice president's office was testifying as part of the Democrats’ House impeachment inquiry, Pence emphasized that neither he nor the president did anything wrong in their dealings with Ukrainian President Volodymyr Zelensky.

Pence addressed both issues after filing to place Trump’s name on the first-in-the-nation Republican primary ballot in New Hampshire. Making clear there's no daylight between running mates, Pence dismissed “without qualification” rumors that he considered invoking the 25th Amendment to the Constitution.

Pence’s comments came hours after the anonymous author of an upcoming anti-Trump book reportedly cited anonymous sources to declare that the vice president was seen to support using the 25th Amendment to have Trump removed from office back in 2017. The Huffington Post obtained an excerpt of "A Warning,” which is written by the unnamed senior Trump administration official who penned a scathing attack on the president in an anonymous New York Times op-ed last year.

The Huffington Post reported that the anonymous author “did a back-of-the-envelope tally of which Cabinet members would be prepared to sign a letter invoking Section 4 of the 25th Amendment to the Constitution” and “there was no doubt in the minds of these senior officials” that Pence would be on board.

Asked by Fox News if there was any validity to the report, the vice president said:  “When those rumors came out a few years ago, I dismissed them then. I never heard any discussion in my entire tenure as vice president about the 25th Amendment. And why would I? I mean the record that we’re celebrating today here in New Hampshire, the record that we’re going to be taking all across this country is a testament to President Donald Trump’s leadership.”

To hammer home his point, Pence added: "I’m happy to dismiss them without qualification today."

The vice president also took aim at the anonymous author. 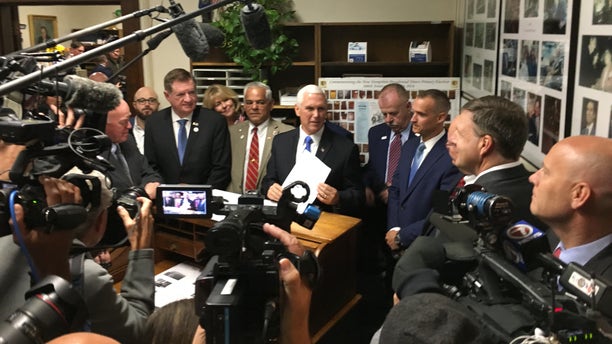 Vice President Mike Pence files to place the name of President Trump on the first-in-the-nation presidential primary ballot at the Statehouse in Concord, N.H., on Oct.  7, 2019

As Pence was in New Hampshire, Jennifer Williams -- his office's special adviser for Europe and Russia -- was behind closed doors on Capitol Hill. Fox News learned that the White House had tried to prevent Williams from appearing or limiting her testimony, but she complied with a subpoena served by House Democrats.

According to a Trump administration official, Williams was on the July 25 phone call between Trump and Zelensky.

The president has come under fire over the phone conversation, in which he asked Zelensky to look into the dealings of former Vice President Joe Biden and his son Hunter Biden in Ukraine. Biden is one of the top Democrats aiming to challenge Trump in next year’s election. Fueled by a whistleblower complaint, a transcript of the call released by the White House and numerous witness testimony, Democrats have argued the president was asking a foreign country to interfere in a U.S. election.

Adding to the controversy was the fact that before that phone call, millions in U.S. military aid to Ukraine was put on hold. Despite allegations that Trump was using the money as leverage, Trump has repeatedly insisted that he did nothing wrong. He said there was no “quid pro quo” and has on numerous occasions described his conversation with the Ukrainian leader as “perfect.”

Pence told reporters, “The American people have the transcript of the president’s call and they can see that there was no quid pro quo and the president did nothing wrong.”

“The president’s focus has been, as my focus in was my meetings with President Zelensky, on supporting President Zelensky’s efforts to deal with a historic pattern of corruption in Ukraine and also to enlist more European support,” he added.

Pence’s trip to New Hampshire came hours before former Attorney General Jeff Sessions was expected to announce his 2020 bid for the Senate in his home state of Alabama. Sessions served as a senator from Alabama for two decades before joining the Trump administration as attorney general.

Sessions, who resigned from the Justice Department a year ago amid public attacks from the president, was one of Trump’s most loyal and trusted advisers before their relationship soured over his recusal from the Russia investigation. If he runs for a seat, Sessions would join a crowded field of Republicans already vying to take on Democratic incumbent Sen. Doug Jones, who faces a challenging reelection in the conservative southern state. The filing deadline to enter the race is Friday afternoon.

Asked if he would campaign on behalf of Sessions if the former attorney general were to win the nomination, Pence said: “We’ll let the people of Alabama make that decision” before pivoting to the president’s own 2020 reelection.

New Hampshire was Trump’s first primary victory. His crushing win over a large field of 2016 GOP rivals launched him toward winning the nomination and eventually the White House.

While there’s plenty of speculation that the vice president will run for the top spot in 2024, Pence told reporters: “I’ll keep you posted.”