Sen. Marsha Blackburn, R-Tenn., said Wednesday that the four Democratic senators running for president should recuse themselves from being jurors in President Trump's upcoming impeachment trial in the Senate.

“Tomorrow, one hundred United States senators will be sworn in to serve in the impeachment trial of President Donald Trump. Four of those senators must recuse themselves for their unparalleled political interest in seeing this president removed from office,” Blackburn said in a statement, speaking of Sen. Michael Bennet, D-Colo., Sen. Amy Klobuchar, D. Minn., Sen. Bernie Sanders, I-Vt., and Sen. Elizabeth Warren, D-Mass.

She added the presidential candidates shouldn’t be allowed to “sit in judgment of the very president" they want to replace.

“To participate in this trial would be a failure of the oath they took to be an ‘impartial justice according to the Constitution and laws,'" she said. "Their presidential ambitions prohibit their ability to view this trial through an objective lens.” 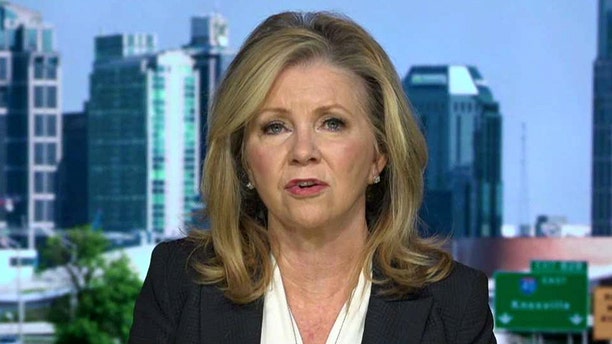 Her office cited an objection that was lodged against an Ohio senator who was next in line to become president if former President Andrew Johnson was removed during his impeachment trial in 1868. Johnson was ultimately acquitted.

Last month, however, Senate Majority Leader Mitch McConnell, R-Ky., said he has no intention of being an “impartial juror.”

“I’m not impartial about this at all,” he told reporters in December. “This is a political process.”

McConnell also told Sean Hannity last month that he plans to be in complete coordination with the White House during the trial.

“There will be no difference between the president’s position and our position as to how to handle this to the extent that we can,” he said.

McConnell said this week he expects the trial to start next Tuesday.