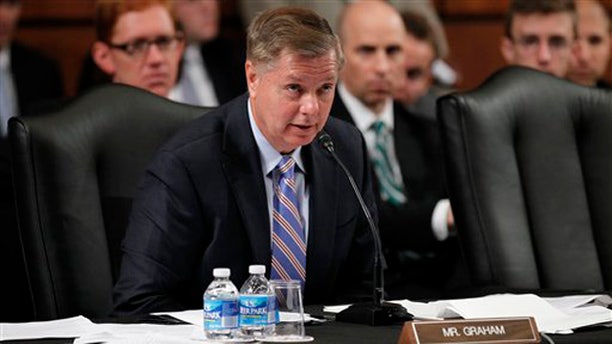 The federal court decision blocking key provisions of Arizona's immigration law from taking effect could light a fire under lawmakers considering an alternative -- and some say radical -- approach to reining in illegal immigration.

Lawmakers since last year have been kicking around a proposal to bar U.S.-born children of illegal immigrants from becoming U.S. citizens. Such a move, which has been ridiculed by legal scholars, would be a drastic reinterpretation of the U.S. Constitution's 14th Amendment.

But those supporting the move say it removes a key incentive luring illegal immigrants over the border. And with Arizona lawmakers now prohibited from requiring police to check immigration status, the option might be back on the table.

Sen. Lindsey Graham, R-S.C., told Fox News after the Arizona ruling came down that "birthright citizenship" needs to be changed.

"I'm a practical guy, but when you go forward I don't want 20 million more (illegal immigrants) 20 years from now," he said. "Let's have a system that doesn't reward people for cheating."

Though other lawmakers have called for a change in U.S. or state law, Graham said he might introduce a constitutional amendment.

"We should change our Constitution and say if you come here illegally and you have a child, that child's automatically not a citizen," he said Wednesday. "They come here to drop a child -- it's called 'drop and leave.' ... That attracts people here for all the wrong reasons."

The amendment process is drawn out, and success is almost always unlikely -- it would take a two-thirds vote in both chambers of Congress as well as ratification by three-fourths of the states. That's 38 states.

Michael Wildes, an immigration lawyer and former federal prosecutor, called the push "pie in the sky" no matter how lawmakers go about it. He said any law altering the 14th amendment would never survive a court challenge and questioned the intent.

"It's spiteful," he said. "These are U.S. citizens. ... They're babies that by the grace of God were born in one country instead of another."

He said immigrants are not by and large crossing illegally into the United States just to have children. For starters, he said the parents would have to wait 21 years before their children could sponsor them for legal residency.

Wildes, former mayor of Englewood, N.J., said changing the citizenship ground rules would fundamentally alter the foundation of the United States. It is a rarity for a country to offer citizenship to anyone just because they're born on that country's soil -- but that principle has shaped the U.S. population.

"America has always been a beacon to the immigrants," Wildes said. "As a result of that, we have made ourselves the greatest superpower in the world."

Children of immigrants include droves of accomplished Americans, including former Supreme Court Justice Louis Brandeis, born in Kentucky to Jewish immigrants from Europe; actor/dancer/singer Fred Astaire, born to an American mother and Austrian father; singer Christina Aguilera, whose father was born in Ecuador; and former New York Gov. Mario Cuomo, born to Italian immigrants -- not to mention President Obama, whose father is from Kenya.

Those looking to fiddle with the 14th Amendment, though, aren't looking to go after children of legal immigrants.

A bill introduced in April 2009 by former Georgia Rep. Nathan Deal called for the law to be changed so that "birthright citizenship" as prescribed in the 14th Amendment only applies if one of the child's parents is a U.S. citizen or national, or a legal immigrant.

That bill has languished in the House since last year, though it currently lists 92 co-sponsors.

Arizona state Sen. Russell Pearce told Fox News last month that he was working with some of the co-sponsors, as he considered a similar bill at the state level in Arizona. Pearce was behind the Arizona law that was partially struck down by the court Wednesday.

Pearce contends that the 14th Amendment, adopted after the Civil War, was intended to protect African Americans.

"Illegal wasn't illegal then," he said. "If you think about it, it's illegal to enter the United States, illegal to remain here, but you get the greatest inducement you could possibly have -- the citizenship of your child. ... It was never intended to do that."

A spokesman for Rep. Steve King, R-Iowa, one of the co-sponsors, said he wouldn't be surprised if the bill started to kick back up "in the wake of Arizona."

Kevin Bishop, a spokesman for Graham, said the senator is currently "discussing the issue" but would not say what route he would take.

"It is something he is very interested in pursuing further," Bishop said.